NOTE: the PWCC Sales History has been updated to show if a payment on a final sales price is still pending. When a payment is received, it is updated as a final sale in the history tool. We have included that Payment Pending notification on assets where it still applies and linked directly to the Sales History page.

The top sale of the night was this 2003 Exquisite Collection LeBron James rookie patch autograph card, which sold for $1.2 million at PWCC Marketplace on Thursday night. That’s the 10th highest selling LeBron card of all time after a marathon-worthy 53 bids were placed on it.

The card is one of the most sought-after LeBron rookie cards in existence. It is also considered an ancestor card to the modern offerings we see today – introducing the concept of the alluring rookie card that includes a jersey patch and autograph.

Further adding to the history of this asset is that LeBron will likely break one of sports’ most iconic records this coming season. He currently stands at 37,062 points. He needs 1,326 points to pass Kareem Abdul-Jabbar and become the all-time leader. LeBron scored 1,695 points in the 2021-22 season, so even if his production falls, he appears likely to set the new mark.

The highest selling red PMG Jordan of all time was realized in the auction with this $564,000 sale. Scarcity and condition are both key elements driving the demand for this card. This copy is graded to an 8.5 by BGS – only four copies of this card have ever been awarded a higher technical grade from Beckett. Since 2020, of the nine versions of this card that have been sent to a public auction, just two lots were graded to a BGS 8.5. There were none sent to auction that were graded higher.

“An 8.5 is an incredibly difficult grade to achieve on this card,” said Jesse Craig, Director of Business Development at PWCC Marketplace. “It has a surface that was designed to reflect and glisten like it was truly a precious metal gem, and the result of the printing process necessary to give it that effect resulted in a very condition-sensitive card. When these cards were originally handled they often got damaged. Even pulling one fresh out of a pack of cards wasn’t an assurance that you’d have a Mint card.”

The highest price ever for a Franz Beckenbauer card was set with this $66,000 sale. Franz’s ’65 Bergmann Fussball Bundesliga #259 rookie card was often meant for placement within an album, and thus is condition sensitive. As a result, this is one of only three to have earned a NM-MT assessment with just one grading higher.

A new record for a Meazza card has been set with a $66,000 sale – more than doubling the previous record for one of his assets. Giuseppe Meazza remains a larger-than-life figure in Italy and this SGC 2 is one of the three best examples ever graded by the company.

The highest price for a Deshaun Watson card was set with a $66,000 sale of his National Treasures Gold true RPA #169. Serial stamped 02/10, this premier RPA is encased within a PSA 10 holder and is a pop 1 example.

The fifth highest sale for a Joe Burrow card has been notched with this $204,000 sale. This incredible 1/1 Red Laundry Tag Crossover, which mirrors NT’s 2010 basketball release is much less common than jersey patches and offers a beautiful design, hard-signed autograph, and one-of-a-kind relic.

A for-card record of this issue was set with a $105,000 sale. The popular Sign of the Times series from Upper Deck in 1998 marks Jordan’s sixth and final title with the Bulls. This PSA 10 Auto 10 Gold Die-Cut also earned an MBA sticker. 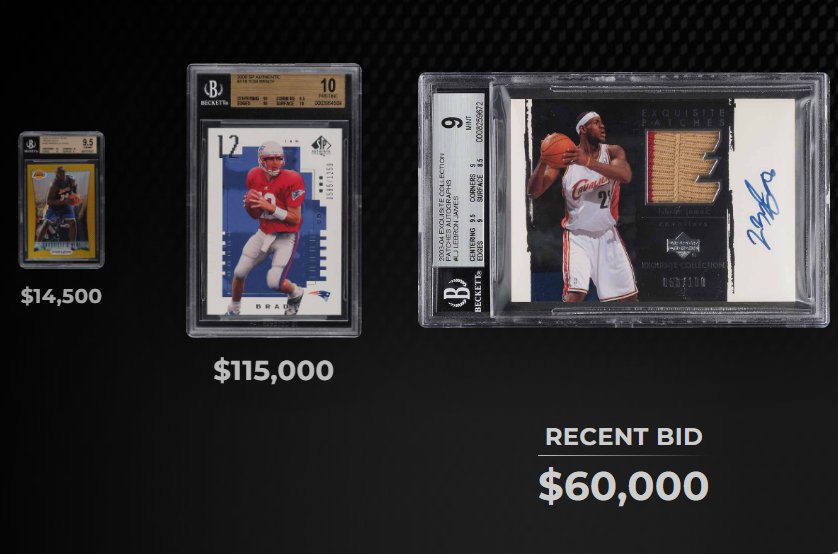