On June 15, 1958 the brand new Ullevi Stadium in Gothenberg, Sweden welcomed in 50,928 soccer fans to the Brazil vs. USSR match. Of the tickets taken that day, only 32 have stood the test of time and been graded by PSA. Of those, few are ever seen for sale. This 1958 World Cup Sweden Ticket Stub graded to a PSA 2 is currently on offer in PWCC’s March Premier Auction. You can find the link HERE.

The card’s technical grade is believed by PWCC to be “conservatively assessed” due to a set of small staple holes on the bottom of the ticket. The reason the ticket is so coveted? It is the international debut of soccer immortal Pele when he was just 17 years old. Of course, this was before Pele had gained legendary status. The main attraction on match day was the impressive Brazilian side – making a group stage appearance in what would become the nation’s first World Cup victory. 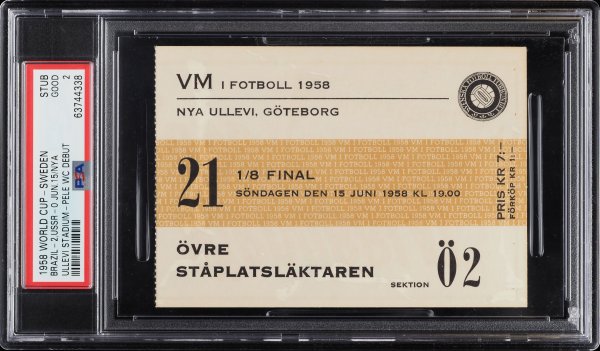 That international victory became an important landmark for the trading card world as well. The 1958 Editora Aquarela set was later released to celebrate Brazil’s first World Cup win. Twenty-four cards featured the full championship squad and the key player to collect was Pele.

The twist is that the set was released in perforated sheets and meant to be pasted into an accompanying album. And many people did just that. Thus, a very small amount of the assets survived. That said, when with a low total population of 144 cards ever graded, the Aquarela is the most traded and highest population Pele rookie. That highlights just how difficult any Pele asset truly is to find – be it a card or ticket stub.

PWCC’s February Premier Auction featured a 1958 Editora Aquarela Ltda Black Number Pele graded to a PSA 7 that sold for a for card record $96,000. 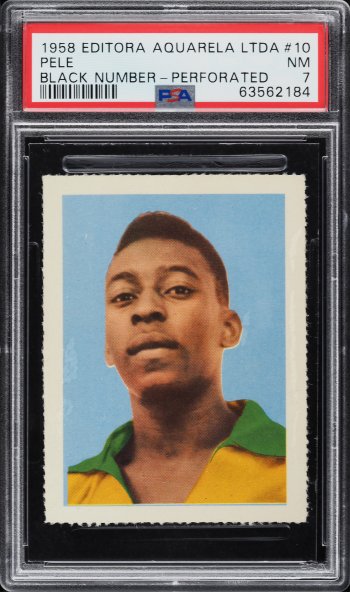