The auction’s top lots include the following exciting, unique, and intriguing items:

“This auction will be the very first time we see the value for the world’s premier Luka Doncic card set by the open market,” said Jesse Craig, Vice President of Sales at PWCC Marketplace. “A Luka card has never sold on a public platform for seven figures or more. It is his premier card making its public debut while he is playing extremely well. It’s a very exciting moment.” 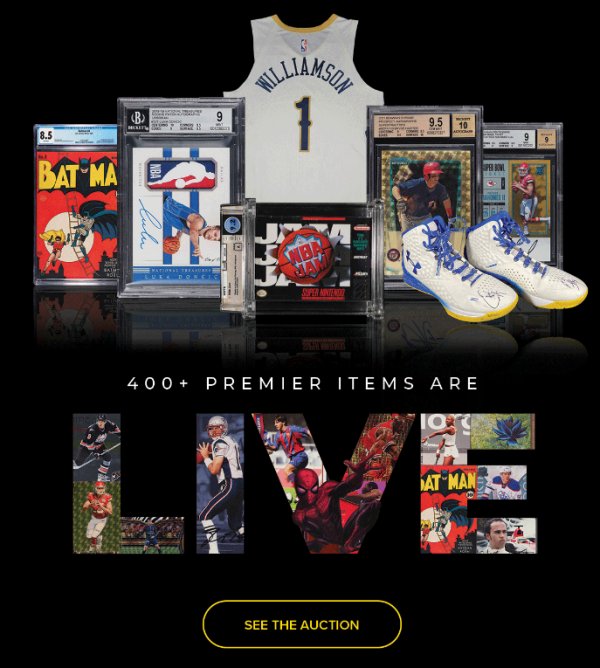 The allure of the card is multifaceted in that it is the most desirable card in existence of one of the NBA’s most exciting stars.

“There is expert consensus that the National Treasures 1-of-1 Logoman for a rookie prospect is their best asset available in the ultra-modern card market,” Craig said. “This would be the premier card for any player. The fact that it is Luka means it is in extremely high demand.”

Doncic is currently the favorite to win MVP at most bookmakers. While the season is young, he currently leads the league in average points per game with 36.7 and is averaging 9.5 rebounds and 8.7 assists.

Bryce Harper’s 2011 Bowman Chrome Superfractor 1-of-1 rookie card features Harper’s autograph and the trademark Superfractor gold spiraled finish. It received a Gem Mint 9.5 grade from Beckett. Harper was named the 2022 NLCS MVP and is currently the front-runner for league MVP. It is — of course — of interest that the card comes to auction amidst the knotted up World Series. Harper’s current record-setting card — a copy of his 2011 Bowman Chrome Orange Refractor rookie autographed card numbered to 25 copies — sold for $45,600 through PWCC in June of 2022.

Mahomes’ 2017 Panini Contenders 1/1 Super Bowl Ticket Rookie Auto is the premier parallel from the annual rookie ticket issue that has been popular with collectors for more than two decades. This lone copy received dual 9s from Beckett.

One of the most coveted vintage football cards in the industry, the Jim Brown rookie offers a classic image of the running back maneuvering downfield with ball in hand inside a unique oval shape. It lists Brown as a fullback and the reverse side features background information on Brown’s achievements and a trivia question. This BVG 8.5 example also earned the PWCC-E (Exceptional—Top 15%) Eye Appeal designation for its stunning centering and color.

It’s considered a blue-chip trading card in the hobby — and this copy is among the finest. This Jordan rookie is not only a PSA 10 but comes with a PWCC-E (Exceptional—Top 15%) Eye Appeal designation. That means it is in the top 15 percent of quality for its already Gem Mint grade.

A signed pair of Steph Curry’s game-worn Curry 1’s – his debut signature shoe with Under Armour – are on the block. This pair features a “Dub Nation” blue and yellow colorway with 4:13 stitched into the tongue and Curry’s autograph on both toes. Curry wore the sneakers on Mar. 18, 2015 and Apr. 9, 2015. They are authenticated and game-matched by MeiGrey. 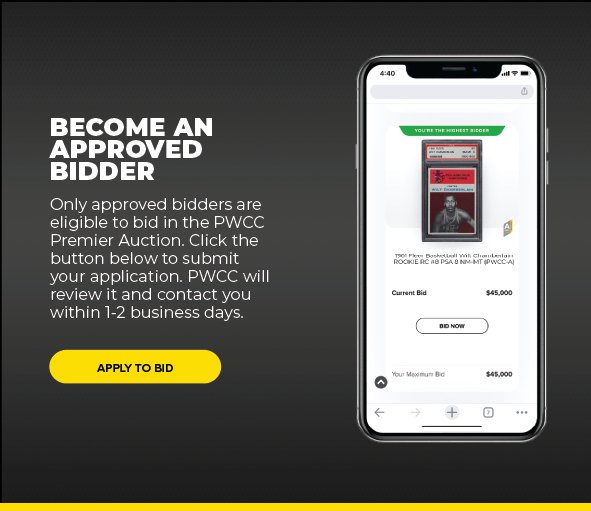