Multiple records and interesting price points were set in the auction. They are listed below.

NOTE: the PWCC Sales History has been updated to show if a payment on a final sales price is still pending. When a payment is received, it is updated as a final sale in the history tool. In the rare case where a payment is not received, the entry is removed from the sales history.

Bryant was the third player in NBA history to serve in a bench role throughout the season and get elected as an All-Star starter. To celebrate the occasion, he wore the black and white colorway of his Adidas Crazy 8 sneakers that featured trimmings in the purple and gold of the Lakers and saw his jersey No. 8 stitched into the base of the tongue.

“These are the sneakers worn by the youngest All-Star in NBA history,” said Nick Cepero, Head of Memorabilia at PWCC Marketplace. “Kobe Bryant’s debut on the All-Star court at 19 beat Magic Johnson’s record and held out against LeBron James’s debut as both were 20 at the time. On top of the historical significance, these are tremendously beautiful in terms of design with the elegant purple Lakers color match and an understated number 8 sneakerheads have come to adore.”

Jerry Rice has a new trading card sales record. The $150,000 sale of this iconic Precious Metal Gems Green issue not only bests Rice’s previous record – which was $125,655 for a copy of his 1986 Topps rookie issue – but it also becomes the first football card from the 1990s to sell in the six-figure range.

Ken Griffey Jr. has a new all time sales record for a trading card – and its not for the iconic rookie. This 1998 patch autograph issue from Upper Deck – and of which there are just 24 in the world – sold for $84,000. That breaks the previous record for a Griffey card by $28,799.

Jalen Hurts has a new all-time trading card record with the $43,200 sale of this copy of his rookie patch autograph that was numbered to just 2 and graded to a 9 by PSA.

The $34,800 of this rookie patch auto card numbered to 10 is a new all-time trading card record for Josh Giddey. 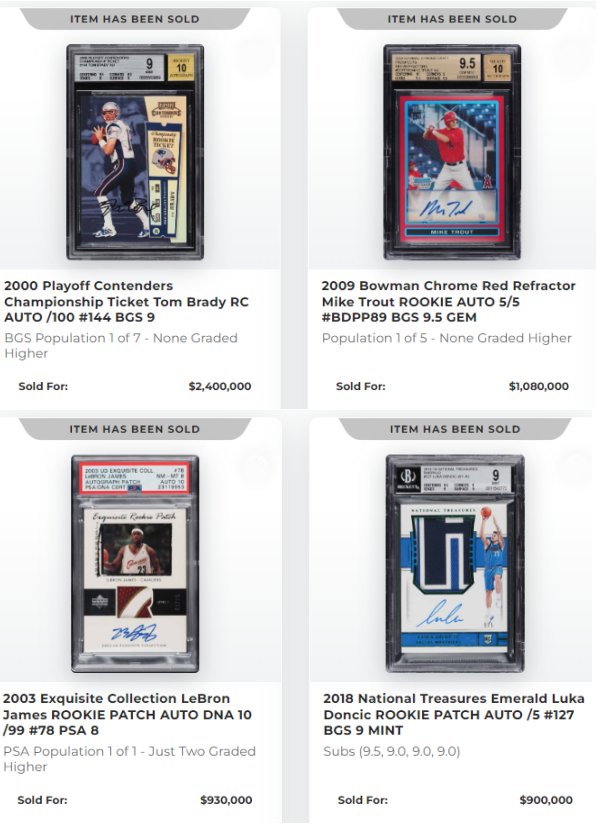