A 2000 Playoff Contenders Autographed Rookie Card of Brady is currently estimated to bring over $1 million in an upcoming online auction. Weaver’s Tom Brady rookie card can be seen, along with other cards including rare cards of Babe Ruth, Ty Cobb and more, on Goodwin’s auction site, https://go-heartland.com/ . The auction is scheduled to end on Wednesday evening July 21, 2021.

When Scott Weaver was recently diagnosed with an aggressive and often fatal form of cancer, he knew his only hope for securing a solid financial future for his two daughters was NFL legend Tom Brady. While Weaver, a self-described “ordinary, working guy,” has never met Brady, the 7-time Super Bowl champion will be providing for Weaver’s family for years to come, thanks to a football card Weaver obtained, completely by luck, several years ago. 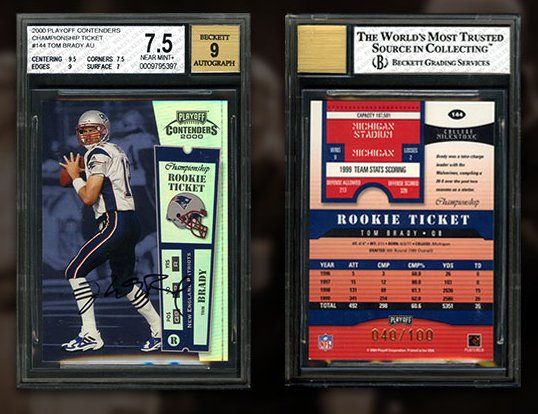 Other Auction Highlights Include:

A Lucky Surprise In A Box Of Football Cards

According to Weaver, sometime in late 2003 or early 2004, he purchased a “surprise box” of football cards on eBay for $100 that was guaranteed to have at least one 2000 Playoff
Contenders Autographed Rookie Card inside.

“I was a die-hard Rams fan back in those days, while the team was still in St. Louis,” Weaver said. “I was hoping I would get Marc Bulger’s signed rookie card (then the Rams’ quarterback), but I got Brady instead. I was actually disappointed at the time.”

When Brady started winning Super Bowls, and kept winning them, Weaver decided he should probably send the card away to be professionally graded, because “it might be worth something some day.” The card came back with a grade of 7.5 on a scale of 1 to 10. The 7.5 grade is known as a Near Mint Plus and qualifies as an investment grade card. Plus, the grade on Brady’s autograph is the highest grade possible, a perfect GEM MINT 10.

For years the card was valued in the hundreds to just over a couple of thousand dollars, Weaver went on to say. But recently, authenticated, graded investment quality cards have exploded in value, leaving sports memorabilia collectors and dealers shaking their heads.

Bill Goodwin, President of St. Louis-based Heartland Sports Cards and Memorabilia, who will be handling online auction duties for the Brady rookie card, described Weaver’s story as “. . . one of those surprise discoveries that people dream about, no differently than picking the winning lottery numbers. Sometimes luck is just on your side.”

“Scott’s story, being a single dad with two daughters, a guy with cancer who can’t sleep at night because he’s worried about his kids, only to have a card that could sell for a million dollars adds something really special to this auction,” said Goodwin. “My daughters are all grown and I can’t imagine what it would be like telling them I have cancer. But Scott’s girls are 10 and 18. He’s worried about how they’ll get by. Selling this card should give him some peace of mind.”

Weaver’s Tom Brady rookie card can be seen, along with other cards including rare cards of Babe Ruth, Ty Cobb and more, on Goodwin’s auction site, https://go-heartland.com/ . The auction is scheduled to end on Sunday evening July 25th.

Bid at https://go-heartland.com/ . The auction is scheduled to end on Wednesday evening July 21, 2021.