The current Clean Sweep Auction #218, is our last major auction of 2014, and we want to again thank our many loyal consignors and suppliers, without whom none of this would be possible. The current auction is in progress and concludes on October 1, 2014. Bid, register and view the auction as csauctions.com. This auction opens up with a truly exciting card, the only Mint 9 example of the 1958 Topps Herrer(a) error.

Clean Sweep’s 10/1 opens up with a truly exciting card, the only Mint 9 example of the 1958 Topps Herrer(a) error. The card has been in the possession of our consignor for 20 years, and was just recently slabbed at the National Convention in Cleveland. A true 1/1, highest graded card. The rest of the auction is remarkably well balanced, with fine selections of great pre-World War Two baseball cards, many fine complete baseball card sets, a great selection of baseball autographed flats and baseballs, some interesting Presidential and entertainment autographs and some great baseball memorabilia, including a real 1973 Mets World Series ring and Mel Stottlemyre’s 1986 Mets World Series jacket.

Baseball autographs follow, with note to a great run of signed team and HOF single-signed GPCs going back to 1929, a John McGraw check, a new selection of documents from 1960, including Cobb, Mantle, Maris and Mays, and from a great Mets collection we picked up, amazing team signed Mets yearbooks from 1965 – 1973, in pristine quality.

Collectors of Presidential, historical and entertainment autographs should have a field day in this auction, as we acquired all new inventory from three different collections. The section opens with a bang, a real Robert E. Lee signed CDV. We have many new Executive Mansion signed cards, two good Reagan lots, the great Dewey Defeats Truman newspaper from 1948 and an Ernest Hemingway signed first edition. Entertainment autographs also contain some great signed photos going back to the 1930s including Mary Pickford, Charles Laughton,
Jay Silverheels (Tonto) and Ethel Merman.

Baseball memorabilia concludes the auction, and this is some of the best memorabilia that we have offered in recent years. We have several fine game used bats, a real 1973 Mets World Series ring and related memorabilia from a former long-time Mets employee that is brand new to the hobby, some fine Mel Stottlemyre game used items, including a 1986 Mets World Series jacket and a possible 2001 Yankees World Series jacket. Ticket collectors will see some great lots from an old time collection, as well as fine full tickets from the 1969, 1973 and 1986 World Series from the same great Mets collection. There is a superb Babe Ruth sterling silver Tour of Japan Cigarette case from Lefty O’Doul, a real Ted’s Root Beer 1959 cardboard sign and a full set of Hartland Statues, many with boxes, offered as individual lots. In short, this is a fun and extraordinarily well balanced auction, with fresh, interesting and exciting offerings all throughout. 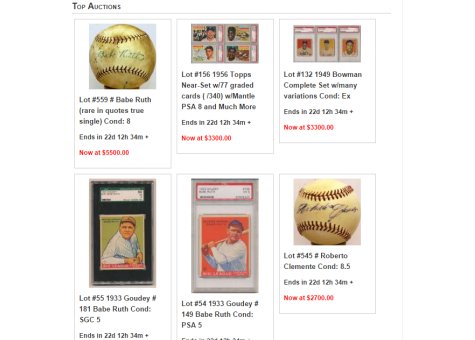