Offered for the MEARS Online Auctions current sale is a rare game worn item of great historical importance associated with Green Bay Packers legend, Curly Lambeau. In a recent interview with Tom Murphy, Green Bay Packers Hall of Fame Archivist, he stated he was unaware of any personally worn item belonging to Curly Lambeau in the archives of the Packers Hall of Fame.

The Heart and Sole of Green Bay 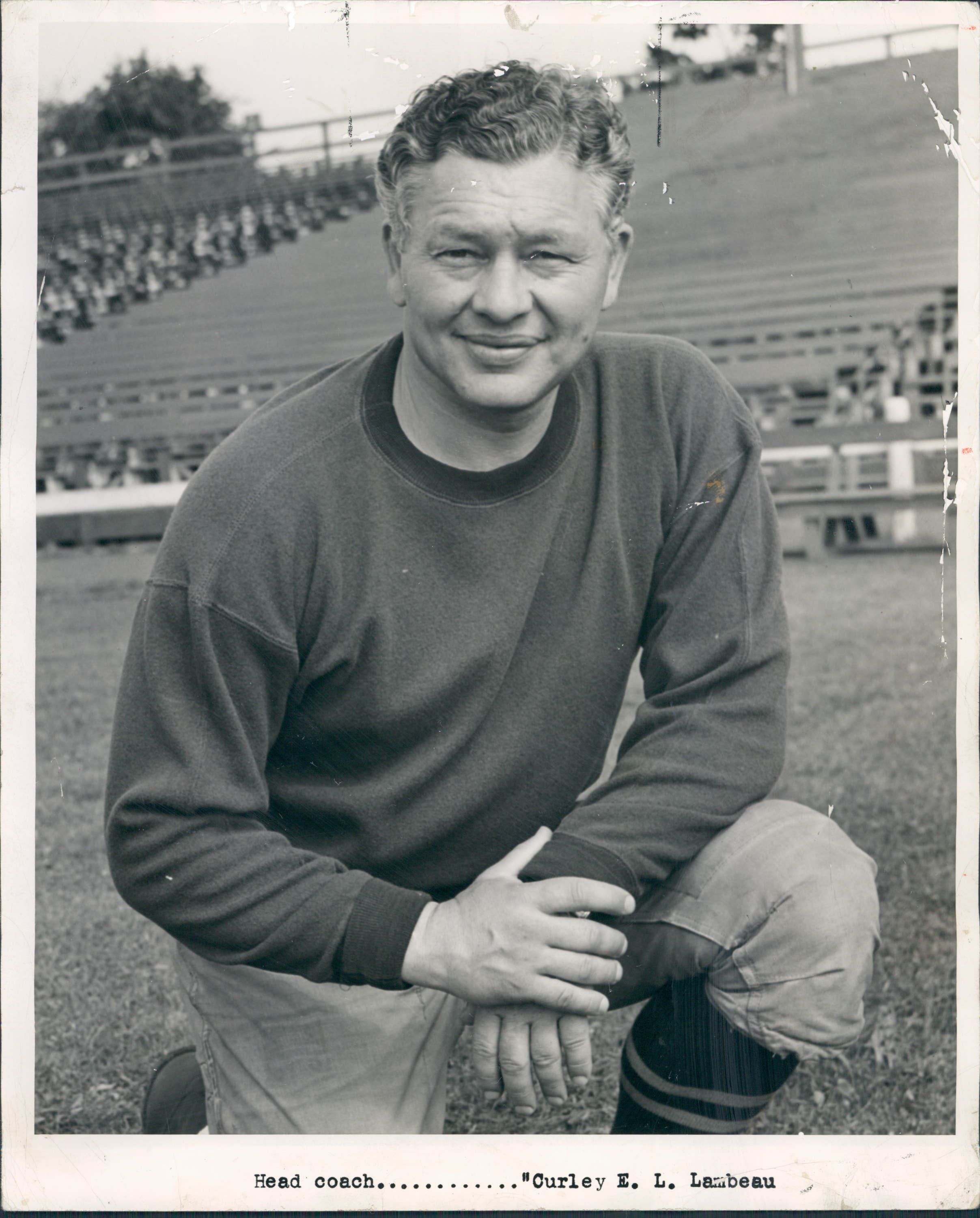 Curly Lambeau was the heart and soul of the Green Bay Packers. Without him, there would be no team in Green Bay today. Other early small town franchises such as Akron and Rock Island lasted but only a very short time before fading into football obscurity. Lambeau, through relentless determination saved Green Bay from a similar fate.

The staff of MEARS Auctions also combed auction catalogs, past sales records, and internet archives and was not able to find one single Curly Lambeau game worn item to come to public market. This
means that to my knowledge and the very best of my research abilities, this is the first and only Curly Lambeau game worn item to survive which can be linked to his possible playing days and coaching career. Research also dates this item exclusively to Lambeau’s tenure with the Green Bay Packers, 1929-43 circa.

World class collections must contain an anchor piece, an item that represents the genesis of a player or franchise. Each main sports category has a nucleus, an item that is the origin of the sport and represents a greater meaning than the artifact itself.

Our hobby has seen several items that fit this classification. Examples that come to mind are the 1869 Cincinnati Red Stockings trade card which is the foundation of a great baseball card collection or the 1891 James Naismith Basketball Rules which outlined the birth of professional basketball.

For this lot, we are offering Curly Lambeau’s 1929-43 circa Green Bay Packers personally worn football cleats, originally given as a gift to close personal friend Mary Jane Duyse. As Lambeau proudly carried the Packers franchise on his back, he was wearing these shoes on his feet. These shoes epitomize the importance of Curly Lambeau to the Green Bay Packers and the NFL. This is one of the most icon relics of Green Bay Packers history ever to be offered publicly.

Mary Jane Duyse was with Curly Lambeau during his final moments. According to the book, “Lambeau: The Man Behind the Mystique” by David Zimmerman, copyright 2003, the author chronicled Curly Lambeau’s final 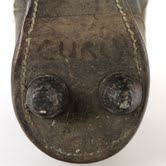 hours while preparing for a date with the much younger Mary Jane. He wrote,

“He drove slowly through Egg Harbor, another little Door County town. He thought of Mary Jane and how much he enjoyed being with her. Even though she was half his age, it didn’t seem to matter to the two of them.

Mary Jane, still living at home, waited as her father Francis mowed the grass of the front yard with an old push mower. “Hey Francis, let me take a turn at that. I need some exercise,” said Curly. Up and down the lawn he went. It felt good. He felt good. “Look at the new dance I’ve learned in California,” and began to do the twist. Francis yelled, “Don’t do this!”

With sweat rolling down his face and his shirt now damp with perspiration, he stopped, reached for his handkerchief in his back pocket and began wiping his face. Suddenly, he felt dizzy, disoriented and sick to his stomach. “I feel kind of sick,” he mumbled, and then fell backwards into Francis’ arms.” 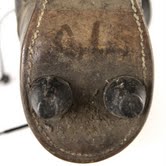 Along with several letters, photographs, and other items of memorabilia, Curly Lambeau presented Mary Jane Duyse’s family these game worn shoes. They proudly remained in her collection for many
years before being gifted to her Sturgeon Bay neighbor.

Research conducted by MEARS Authentication services dates these shoes to the 1929-43 era, all exclusive to his tenure with the Green Bay Packers. This was determined by photographic analysis, review of trade ads, and a review of the physical shoe construction.

The shoes themselves were manufactured by Riddell Sporting Goods are an early version.

According to his online biography, John Tate Riddell was born in Georgetown, Michigan in October, 1885. From 1913 through 1927 he taught Mathematics and was Head Football Coach and Athletic Director at Evanston Township High School in Evanston, Illinois. It was at this time Mr. Riddell invented and developed the removable cleat.

He did it to solve a problem for his Evanston High School team. In those years football shoes were equipped with leather cleats. At the time, football cleats were made of leather and nailed to the sole of the shoe. Changing cleats due to inclement weather required the services of a cobbler to have longer “mud cleats” installed. Because Northwestern University used the same cobbler as Evanston Township High School, Evanston’s football shoes were often not finished by game time.

Riddell knew his idea would solve this problem for everyone, once and for all. Lacking the capital necessary to start his own business, Riddell had his shoes manufactured by the J.P. Smith Shoe
Company, and he and his wife installed the posts and cleats in the evenings. He continued to teach, coach and produce his shoes until 1927, when, with the popularity of shoes growing, he left education to devote his entire effort to producing shoes. John T. Riddell, Inc. was formed in February, 1929.

It makes great sense that Curly Lambeau would have quickly adopted the use of a new innovation such as a detachable cleat. Everything written about him supports his promotion of strategic innovation and it is only logical that translated to improvements in available equipment.

Since Riddell officially formed as a company in 1929, we base the starting date as a possible year of issuance to 1929. This was due to the fact “RIDDELL” is stamped in a series of punch holes on both tongues. It is possible based on the design these shoes were available to Lambeau to wear during his final season as a player/coach with the 1929 Packers team. 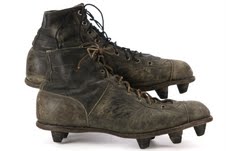 According to May, 1932 John T. Riddell, Inc. print ad (copy included), the cleats were described as, “Riddell Football shoes were first used in 1922, Northwestern University has used them continuously since 1923. University of Chicago since 1924, Illinois and Nebraska and many others since 1925. Riddell cleats have won for themselves the unique distinction of being the original and only screw cleat that will stand under hard usage.”

Examination reveals this is the correct 7 screw cleat shoe offered by Riddell during the period.

Further review determines these cleats are the hand turned yellow back Kangaroo hide, consisted with catalog model, “Style G” which originally sold for $14.00 and was the top of the line model. The
literature goes on to note that the several colleges including the University of Wisconsin wore this model shoe.

Examination of the cleats when compared to the Riddell official sales literature helps MEARS determine this is a No. 1 style cleat. The catalog describes it as, “No. 1, Best for practice and wear. Being softer is easier on the feet.”

The catalog does list cleat No. 4 as a “game cleat”. Since No. 1 was listed as “best for practice”, this may indicate this was Lambeau’s preferred pair of coaching shoes.

With the rudimentary application of the tongue “RIDDELL” stamping, his may have been personally done by John T. Riddell and his wife as they built the early cleats together during the evenings. This would pre-date our estimated 1929 dating and would have made these shoes available for Lambeau to wear while a player for the Green Bay Packers. This fact cannot be substantiated, but the strong possibility does exist. A 1927 image of Lambeau playing for the Packers feature him wearing a similar pair of high top football cleats, but the exact maker is unidentified.

Available images verify Lambeau as wearing this style at various points of his career with the Green Bay Packers. The following images support high top cleats being worn by Lambeau early in his career, 1927-43, and low tops later:

Available images suggest that Lambeau switched to a low top style around 1944, and continued with that preference until his retirement from Pro Football in 1952.

Examination reveals both Riddell shoes have heavy game wear. The entire leather exteriors of the shoe shows scuffing and wear to the yellow Kangaroo hide. The canvas interior also shows signs of
heavy game wear. Certainly a full season’s worth of use, possible more. Both “RIDDELL & 11 (size)” are punched into the leather of the tongue. Both cleats have a complete set of (7) No. 1 style cleats that remain tightly attached. The left shoe has replacement black leather lacing, the right shoe has a vintage brown leather lace, and I am not sure if it is vintage to the shoe. Small clumps of ancient dried mud and grass are found embedded into various crevices of the sole’s of the shoes, possibly picked up at City Stadium or Milwaukee State Fair Park.

In addition to the direct chain or provenance, each shoe is marked with an unique identifier exclusive to Curly Lambeau. On the left shoe, “C.L”. I is neatly written in faded, worn black marker.

On the right shoe, “Curly” is neatly written in faded, worn black marker. The use of the name “Curly” is proper for the era as he was first listed as “Curly” Lambeau in a 1918 newspaper article covering his Notre Dame career. The name stuck and we was referred to as Curly almost ever since.

Examination reveals the black marker to be faded and worn, both signs of authentic patination. The remnants of the ink have set deeply in with the leather of the soles. It is in my expert opinion that the writing was placed on the shoes around 80+ years ago.

These shoes have remained in Sturgeon Bay since the day Curly Lambeau personally hand delivered them to Mary Jane Duyse. The cleats were proudly displayed in her home for many years. At some
point after the death of Mr. Lambeau, the next door neighbor of Mary Jane Duyse obtained the shoes from the Duyse family. He cherished them for many years before gifting them to our consignor (also a Sturgeon Bay resident) shortly before his death. I personally drove to Sturgeon Bay to take possession of the shoes for our current auction, which was only miles from the home of Mary Jane Duyse and the spot where Curly Lambeau died. The existences of the shoes have been known within the Packers collecting community for many years. Our consignors’ letter will chronicle the names of all owners in the custody chain.

During 1929 Lambeau became the team’s coach and playing captain. Lambeau was the first pass-minded coach in the NFL and his teams were like their leader, impatient and explosive. An excellent passer in his own right, Curly flew in the face of common practice.

Despite rules that made it difficult to use the forward pass, Lambeau’s Packers were a team whose main offensive weapon was the pass – at any time, on any down, from anywhere on the field. With his
vaunted passing attack, he led the Packers to championships in 1929, 1930, and 1931. After signing future Hall of Fame receiver Don Hutson in 1935, they won three more titles – 1936, 1939, & 1944.”

It is highly probably these shoes were worn during one or more early Championship season. A more historic item of Green Bay Packers history does not exist.

A LOA from the consignor detailing the provenance directly back to Mary Jane Duyse will accompanying this lot. LOA Troy R. Kinunen / MEARS Auctions, LOA consignor.