Goldin Auctions is pleased to announce that with only eight days to go before the close of the 2020 Spring Premium auction, the company has added one of the best Michael Jordan game used uniforms ever offered – a Jordan game used and photo matched Chicago Bulls black alternate road uniform (jersey & shorts) from the 1996-97 season (Lot #1892). This is the only 1996-97 Jordan game used and photo matched uniform to be offered for public sale and is expected to exceed the $250,000 mark.
It was photo matched by Resolution Photomatching to the April 13, 1997 game and is also the only Jordan 1996-97 black uniform to be offered for public sale with a Bulls’ letter! Jordan memorabilia continues to be in higher demand, particularly with the release of the series “Last Dance” and Jordan’s popularity is only going to increase.
Goldin Auctions has, what is believed to be, the largest collection of Jordan memorabilia ever offered in ta single auction with over 70 Jordan-related items, including: a 1986/87 Fleer #57 Jordan Rookie Card graded a GEM MT 10 by PSA; a 1987 Jordan Game Worn Bulls Shooting Shirt (Sports Investors Authentication); a 2003-04 UD “Exquisite Collection” Emblems of Endorsement #MJ Jordan Signed Game Used Patch Card (#14/15) – BGS MINT 9/BGS 10; 1995-96 Jordan Game Used & Signed Air Jordan Concord 11 Sneakers (CharitaBulls LOA); and a very rare 1983 Jordan and University of North Carolina Team Signed Sports Illustrated November 28, 1983 Promotional Poster with 15 signatures including Jordan, Perkins, Daugherty & Kenny Smith (JSA).
The Spring Premium Auction is currently open for bidding through May 16 at  www.GoldinAuctions.com. 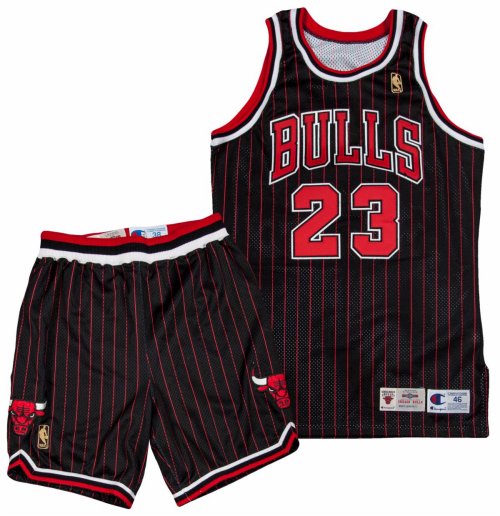 “While it is unprecedented for us to add such an historic item with just one week remaining in an auction, interest in Michael Jordan memorabilia is at such a frenzy right now, we felt that this was actually the perfect time to offer collectors the opportunity to own this one-of-a-kind Jordan jersey,” said Ken Goldin, Founder of Goldin Auctions.
About Goldin Auctions: Sports memorabilia impresario Ken Goldin has sold more than $700 million in memorabilia from many of the biggest names in sports, history and pop culture and was the pioneer of using the medium of television to sell sports memorabilia. Over the past few years, Goldin Auctions sold a Honus Wagner T206 card for a public sale record $3.12 million, Babe Ruth’s 1918 contract for a record $1.02 million, the Mike Piazza Post-9/11 home run jersey for $365,000, and the 1979-80 Wayne Gretzky PSA GEM MT 10 rookie card for a record $465,000. Goldin Auctions strives to break new ground and offer collectors the best in collectible treasures up for auction in the marketplace. Goldin Auctions is the official auction partner of the Naismith Memorial Basketball Hall of Fame, the Jackie Robinson Foundation and the Babe Ruth Birthplace and Museum. For more information, visit goldinauctions.com
Tagsauction chicago bulls game-used memorabilia goldin auctions Michael Jordan game worn jersey photo matched