An important piece of American history will be offered when a rare copy of The Federalist: A Collection of Essays, Written in Favour of the New Constitution still in its original publisher’s boards crosses the block in Heritage Auctions’ Rare Books Auction March 6 in New York.

“The Federalist Papers were written as part of an effort to get the New York delegation to ratify the Constitution – it made the case for Federalism and sought to convince the citizens of the states,” Heritage Auctions Rare Books Director James Gannon said. “Probably around 500 copies were printed, and this example is particularly rare because it’s still in the publisher’s boards. You just don’t find them like this.” 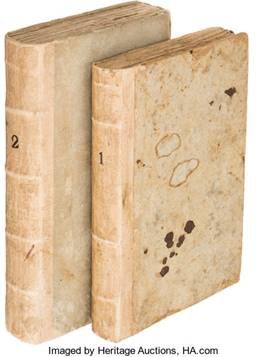 The board bindings were meant to be temporary, and purchasers of books in the 18th century would have their binders trim the edges and then rebind the book in calf, so a copy in this configuration is an undeniable rarity.

The books, with a pre-auction estimate of $75,000+, originally were published in New York newspapers under the pseudonym, “Publius,” and without the authors’ names in this first collected edition. But the real names of the authors – Alexander Hamilton, James Madison and John Jay – are hand-written on the title page.

The lot is in two volumes, published two months apart: March 22 and May 28, 1788. According to Printing and the Mind of Man, “The eighty-five essays, under the pseudonym ‘Publius,’ were designed as political propaganda, not as a treatise of political philosophy. In spite of this The Federalist survives as one of the new nation’s most important contributions to the theory of government.”