While January is usually a quiet period in the sports memorabilia hobby, as its players recover from the holidays and set up strategies for the new year, Mile High Card Co. is rolling out a high-end auction that will awaken collectors from their slumber. Dubbed the “Premium Auction,” Mile High will be rolling out an auction with fewer lots but filled with high-end items. The auction will run from Jan. 10-26. Bidding can be conducted online at www.milehighcardco.com or by calling (303) 840-2784.

According to Brian Drent, the Premium Auction will have more memorabilia than a normal Mile High auction, but there will still be plenty of high-end cardboard to please the masses. 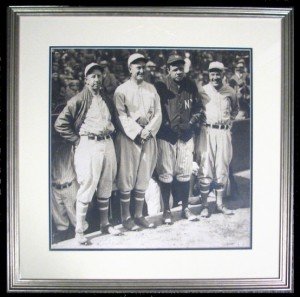 Memorabilia highlights
Leading off the auction at Lot 1 is a stunning 20-by-20-inch Type 1 photograph featuring Babe Ruth, Ty Cobb, Eddie Collins and Tris Speaker. Mile High said the photo appears to be from 1928 at Yankee Stadium, the only years Cobb, Speaker and Collins played together on the Philadelphia A’s.

Another item featuring Ruth is a 1945 contract, signed George Herman Ruth, that also features the signature of Ed Barrow. A gorgeous signature and a unique document featuring a full signature.

And for those of you who forgot Ruth was a pitcher with the Boston Red Sox, Mile High will feature a 1915 original photo by Underwood and Underwood of Ruth warming up prior to a World Series game. 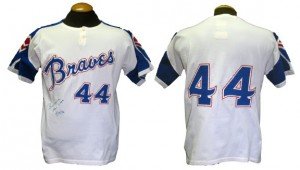 Among more amazing signed photos are a Ty Cobb signed Conlon photo, Roy Campanella 1940s photo and Jackie Robinson. These go along quite well with the dozens of Type 1 original photos sprinkled throughout the auction.

Perhaps one of the most unique pieces in the sale is the eyeglasses worn by Archibald “Moonlight” Graham with their original case – the actual doctor/one-game ballplayer who was depicted in the iconic baseball film Field of Dreams.

Cardboard highlights
In a category in which Mile High excels, sports cards will again attract top attention in this sale. Heading the list is a 1954 Bowman Baseball master set completely graded and resting at No. 2 in the PSA Set Registry with a 8,69 GPA. 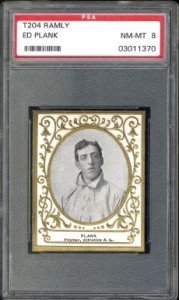 One of the biggest lots in the auction is a near-complete set (99/100) of 1953 Parkhurst Hockey that is currently No. 1 on the PSA Registry. This lot will be sold as a complete set or as singles, whichever has the highest aggregate bidding.