A significant amount of items from Reggie White’s personal collection, including this MEARS and JSA authenticated Jerry Rice helmet will be available in the Worthridge Fall Sports Auction, beginning November 19.

This is an opportunity to own a gift exchanged between two of the greatest players in the history of the National Football League. Jerry Rice gave this game used and autographed helmet to Reggie White, most likely after one of the seven NFL Pro Bowls in which they both participated between 1989 and 1995.

The autograph, in black Sharpie, is inscribed “To: Reggie- The best I’ve ever seen!– Jerry Rice #80” 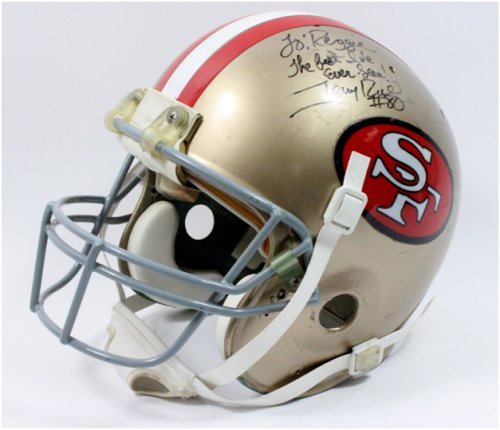 Jerry Rice and Reggie White combined to play in 26 Pro Bowls, won four Super Bowls, and were named first team All Pro a staggering 22 times. In a 2014 Documentary of the 100 Greatest Players in NFL History, White ranked #7 while Rice was voted as the best player in the history of the League.

Worthridge is proud to present the Reggie White Collection, and all items will be a part of their second Sports Memorabilia Auction, running from November 19 until December 6.

Preview and register for this auction at www.worthridge.com.