A historic broadside announcing an 1864 Union flag raising for Abraham Lincoln and Andrew Johnson, and a rare glass and tin Lincoln political lantern are being offered in Heritage Auctions’ auction of the David and Janice Frent Collection of Presidential and Political Americana, Part V June 22-23 in Dallas.

Abraham Lincoln: A Fabulous, Colorful Political Glass & Tin Parade Lantern is extremely rare, one of perhaps three known to remain in existence. Nighttime political parades and rallies were a regular part of the political efforts of the era, and lanterns like the one offered here were fitted to be carried on a pole to declare support for a candidate. 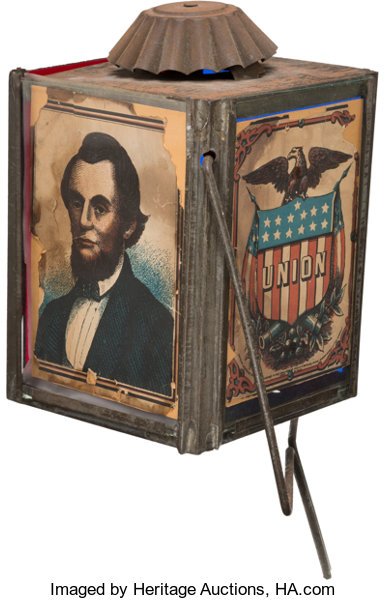 “This is an exceptionally rare lantern that will generate a lot of interest among collectors,” Heritage Auctions Americana Director Tom Slater said. “Lanterns like this, with a candidate’s name and portrait on the side panels, were an important part of political efforts during that era, but being made largely of paper and glass, very few have survived. There are probably only about a dozen left for all candidates. For Lincoln, who is so popular, there may be as few as three such lanterns left in private hands, making this an exceptional find for collectors.”

The Abraham Lincoln: Important 1864 New Jersey “Flag Raising” Broadside is a historically significant piece of political memorabilia. Although the exact location of the event is not specified, it is believed to have taken place in Newark, New Jersey. Believing his reelection was in serious jeopardy, Lincoln replaced his first-term vice president, Hannibal Hamlin of Maine, with his military governor, Andrew Johnson of Tennessee. Lincoln worried that his reelection bid would fail without border-state votes, which he was counting on Johnson to deliver. Lincoln lost New Jersey to Democrat George McClellan, but events like the one announced on this broadside were critical in generating support for the war effort and re-election campaign.

A Grant & Colfax: Spectacular Large 1868 Jugate Campaign Flag is widely regarded as the finest jugate flag design for the presidential ticket of Ulysses S. Grant and his vice president, Schuyler Colfax. This exceptional rarity is one of just two known examples, with the other residing in one of the hobby’s leading flag collections.

Many collectors consider political flags, especially those with portraits, to be among the ultimate prizes of campaign and political memorabilia. Stephen A. Douglas: Rare and Important 1860 Campaign Flag Bannerfeatures the former Illinois lawyer and politician who was the Northern Democratic presidential nominee for the 1860 election. His campaign material is among the most coveted by collectors, in large part because most items – including flags like this one – are exceptionally rare. This flag is in extremely high demand as an exact mate for a flag produced for Abraham Lincoln.

Featuring a rare 31-star design, a John C. Frémont: Rare and Impressive Campaign Flag is unlisted in Threads, which only shows two Frémont name flags. Of the three name flags known to exist, this is the only that lists the offices sought in the 1856 election by Frémont and his running mate, vice presidential candidate William L. Dayton. The 31 stars are laid out in a six-pointed star pattern.