A collection of rare memorabilia, from many of the greatest players in NBA history — Michael Jordan, Shaquille O’Neal, Larry Bird, Bill Sharman, LeBron James, Stephen Curry, Kobe Bryant and Nate “Tiny” Archibald headline the many NBA-related items in the Goldin Auctions 2016 Premium Live Auction at the National Sports Collectors Convention in Atlantic City on August 4. Bidding for these items, as well as the corresponding catalog auction begins on July 11 at www.GoldinAuctions.com.

“There is no doubt that that NBA memorabilia from legendary players like Bird, Shaq and Jordan is on the rise, as over the past year we have had many such items far exceed their pre-auction estimates and set new records,” said Ken Goldin, Founder of Goldin Auctions. “These great NBA players are to the current generation what Mantle, Mays and Jim Brown were to the previous one.”

The white home Chicago Bulls jersey that Jordan wore in their 83-70 victory in Game 1 of the 1998 Eastern Conference Semifinals versus Charlotte on May 3, 1998 marks another unique Jordan item being brought to auction by Goldin Auctions over the past year. It was signed diagonally on the “2” on the back of the jersey immediately following the game. It comes with full LOAs from the Bulls and The MeiGray Group, who have photo matched this jersey to the game and an Upper Deck Authenticated hologram (BAM00001) authenticating Jordan’s signature.

The purple Lakers road jersey with the NBA Finals patch sewn just above the “L” (in Lakers) that O’Neal wore during Game 5 of the 2001 NBA Finals has been definitively photo-matched by The MeiGray Group as the only jersey he wore during that clinching game. It has multiple documents from MeiGray accompanying this museum-quality piece, including a detailed LOA describing the photo-matches to both the game and post-game celebration along with a photo of Shaq in the jersey holding both the Larry O’Brien and NBA Finals MVP trophies.

Bird’s classic Celtics green jersey from his remarkable 1980-81 rookie season has “CELTICS” arching across the chest and Bird’s number “33” below in white tackle twill. The second “3” has been torn and clubhouse repairs made showing extensive game use. The back of the jersey has “BIRD” across the shoulders and his number “33” in white tackle twill. The second “3” has a vertical stain and the bottom has been frayed and has come loose and a small lightened mark is visible above the “I” in “BIRD”. The repaired “3” on the jersey’s front enabled it to be matched to a photo of Bird from the February 27, 1981 win over the Atlanta Hawks. A copy of this photo is included in this lot. This great Bird gamer from his very first championship season comes with a LOA from The MeiGray Group (MGS152835).

Another former Celtics great, Bill Sharman, actually started his career in 1950 with the Washington Capitols, but after just 35 games, his rookie season ended as the Capitols were disbanded. This is the jersey he wore during his rookie season in which he led the team in scoring at 12.2 ppg. It’s the first-ever known jersey of this very early NBA team, and was worn by their most famous player, a basketball Hall of Famer and NBA Top 50 player, making it one of the most significant basketball jerseys ever offered at auction. It comes with a full LOA from MEARS, who have noted it as the first example of both team (Capitols) and player (Sharman) they have evaluated, and have graded this jersey a perfect A10.

Also up for auction are three rings signifying great moments in Archibald’s career. A 7-time All Star and NBA Champion in 1981, “Tiny” averaged 18.8 points and 7.4 assists per game in his career, highlighted in 1972-73, when he became the only player to lead the NBA in scoring and assists in the same season. The three rings include: his 1981 Celtics Championship Ring; his 1991 Basketball Hall of Fame Induction Ring; and his “NBA 50 Greatest Players Ring” awarded in 1996. Each ring is accompanied by an LOA from Archibald that states — “This is the original ring that was awarded to me and no duplicates have been produced or authorized.”

The live auction also features several lots from current NBA stars including: a 2013 Stephen Curry game-worn and signed playoff jersey and Curry’s sneaker’s from Game 2 of the 2015 NBA Finals. Another lot offers a game-used basketball from a 2014 Cavs-Nets NBA Playoff game in which LeBron James score a playoff career high of 49 points; and from the recently retired Kobe Bryant, Goldin Auctions is offering a 2012 game-worn Lakers jersey and a pair of his 2014 game-worn Nike sneakers.

To register for the auctions or to receive a free catalog, visit www.GoldinAuctions.com. 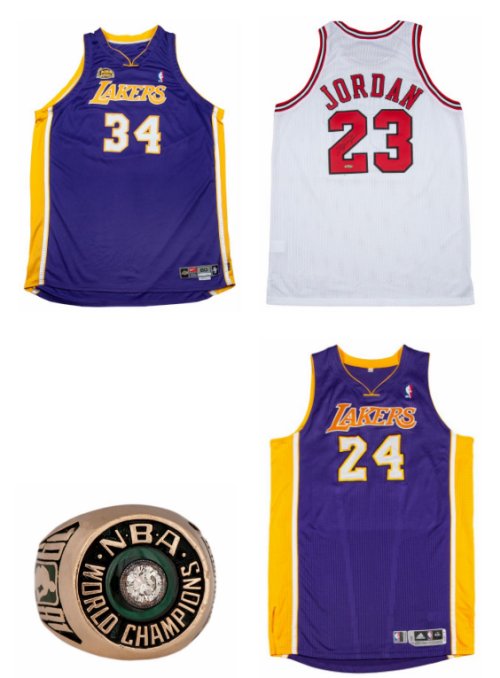