The following lots are  featured in the August 25th – September 1st, 2012 MEARS Online Auction, www.mearsonlineauctions.com . We are currently accepting consignments for our September auction, and are aggressively seeking football / baseball memorabilia, game worn jerseys, leather helmets, rare model gloves, catcher’s masks, autographs, programs, tickets, vintage photography, advertising, etc.  These images were carefully selected as choice representations of early American football and baseball team photography. Many of the photographers are identified with the studio name appearing on the cabinet card portion of the photo. Examination revealed amazing detail of the equipment, uniforms, and fashion of the day.

These images provide a rare opportunity for bidders to add images to their collections which capture the essence of early sports in America. Although baseball had a professional league and college football had swept America, it was the local town teams and schools that sprouted the roots of America’s pastimes, and led to the growth of professional sports, which then led to the organized hobby that we now participate in.

Examination of the faces captured in these timeless images show the individuals that fueled the love of the game for future generations.

Measuring 7 ½” x 9 ½” on 11”x14” grooved mount; this image depicts a small college football squad. 12 players stand in line against the backdrop of a small University building. The period melon football is simply painted, “1913”. The cardboard mount is dated 1914 in pencil at the bottom center border. The third player from the right must have been a 6th year senior, as he is proudly wearing the old fashioned union football suit with sewn on shoulder pads. The rest of the team wears a contemporary, simple dark colored long sleeved shirt with reeded football pants. At least four distinct styles of leather football helmets are depicted, including the Princeton Model, Rain Cap, and Dog Ear football helmet varieties. Two men in civilian clothes flank both sides of the football team.

The image retains exceptional contrast and hue. The images itself grades in near mint condition, with the only exception a small 1.5” indentation (not quite a tear) near the upper right window.

Photo remains in very good condition with pinholes to the corners. 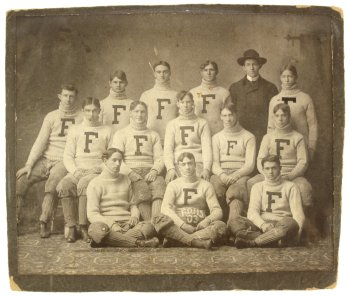 Image measures 10”x12” on 12”x14” cardboard mount. 13 players wearing white turtle neck with long sleeve football jersey tops with quilted pants and reeded shin guards. 12 players have the school’s “F” positioned on the front, with on seated player seen without the team letter. Player sitting on bottom middle is holding a vintage melon football with the white writing, “F.D.H.S., ‘03”. The school’s father, who also served as coach, can be seen in the back row with cap and collar. Uniforms are completed with high top leather lace up high shoes. Photograph taken indoors with special note to the Victorian carpet.

Image remains in excellent condition, with only exceptions of small scratch on face of player (center/back row) and a small stain on the teammate next to him. Mount is in very good condition, and may have been trimmed.

Measuring 8”x10”, 21 uniformed players are featured, with four alternates standing in the back row not wearing official team jerseys. Majority of the players are wearing friction striped jerseys, some with uniform numbers, some without. Two gentlemen in the back row are wearing jackets with “Pleasantville” across the front. The boy in the bottom center row is holding a football which is painted with white lettering, “P, 1936”. All players are outfitted in black leather high top cleats. Image remains in excellent condition, with some damage in the form of pinholes to the outer 4 corners.

Player’s names are written on upper border on cardboard mount. Names visible are:

Players name are written with arrow drawn, in order:

Written in red pencil on the bottom is, “1913 Chehalis High School”.

Image measures 11”x14” on 16”x20” cardboard mount. “Gilbert Bacon, 1030 Chestnut St., Philad’a” factory stamped on bottom border. 16 players featured. 15 are wearing full lace up front vests with quilted football pants. 2 players are wearing striped socks. Many of the depicted athletes can be seen wearing reeded shin guards. The uniforms are completed with lace up high top wooden cleated football shoes. One player sitting with both hands on thighs is wearing the rare full sleeved lace up vest style jersey. Image appears to have been taken outside in front of a stone building.

Images itself remains in excellent condition with the exception of foxing on the left border and the right third. Mount has some chipping to upper left edge, piece missing on bottom right corner, and a heavy water stain on the left edge and bottom area. LOA Troy R. Kinunen / MEARS Auctions

Image measures 8”x10” on 11”x14” double grooved mat. 13 players pictured wearing dark long sleeve jerseys with some having multi striped sleeves. Two players have sewn on elbow pads. The team’s uniforms are completed with dark colored, lace up, high top football cleats. A small pile of 5 leather football helmets can be seen in the bottom center of the image.

Player’s names are identified on bottom border of mount:

Each player is indentified by a number written in ink on the photo and then identified below in the bottom border. Image remains in excellent condition mount remains in very good condition in spite of being trimmed and has chipping and pinhole in upper left corner. Pinholes in bottom right corner and additional edge chipping. LOA Troy R. Kinunen / MEARS Auctions 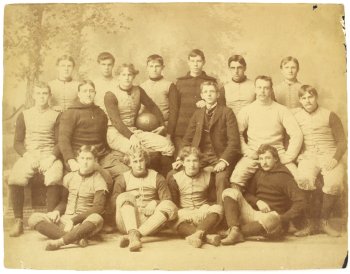 Each player has signed the back of the cardboard mount. On the reverse the following names appear in period fountain ink:

The actual image is in near mint condition, with striking contrast and clarity. The grooved mount is fully intact, with slight water spotting in the area of the upper left corner, which does not affect the actual image. LOA Troy R. Kinunen / MEARS Auctions 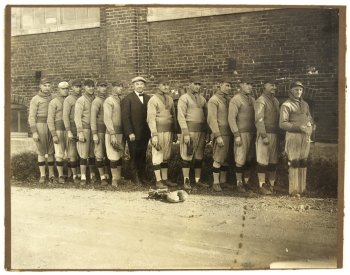 12 players standing single file while sporting their team baseball sweaters and striped flannel pants. All wearing identical baseball caps (small brim) with the exception of the second man from the left, who stands out by wearing his white with “B” cap. The catchers are first in line (wearing reeded shin guards) and his holding a trophy. The manager stands in the center wearing civilian clothes and fashionable cap. In pencil on the reverse are the following names, “xxxxxx, Mills, J. Kelsey, Johnson, Kelsey, Stuber, Hight, Scheideman, Halin, Houck, Mack, Pflanz, and Kelly”. Dated 1922.

Measuring 6.5” x 8.5” on decorative bordered mount. Starting nine players depicted including batboy or mascot. ¾ button down flannel jerseys and short brim caps are consistent with the 1900-1910 style of baseball uniform. The simple chicken wire fence and bleacher seating of the stadium can be seen in the background.

Actual image is in near mint condition, with only a very small ¼” chip out of the bottom border. Mount remains in excellent condition with slight chipping on outer edges. LOA Troy R. Kinunen / MEARS Auctions

Measuring 4.5” x 6.5” on decorative flowered embossed 7”x9” mount. 10 players wearing the period 1906 style ¾ button down flannel uniform with collar. “Cargill Press” is lettered on the front. The dapper looking manager with suit and derby also appears in the photo. Image is a treasure trove for equipment collectors. Seen at the bottom of the photo is a pile of baseball gear including several webless workman’s gloves, bird cage catcher’s mask, two bats, one with handle tape, and the lace up baseball shoes.

Actual image survives in near mint condition, with damage to the bottom left corner of the mount which does not affect the photographic image. LOA Troy R. Kinunen / MEARS Auctions

Measuring 5”x7” on decorative 7”x9” bordered mount. Group, possible family of 43 is depicted. Notable images of a gentleman with a long, grey beard, guy with straw hat and mustache holding the game ball, another gentleman in the first row standing holding a beer while wearing a glove, guy on far right dressed in a suit holding a beer, gentleman seated holding a beer and smoking a pipe, young kid holding a bat, and in the center of the photo, criss cross bats balancing on an empty bottle of bear which is placed in front of the catcher’s mitt.  Photo is approximately dated by the seated gentleman, right of crossed bats in a dark shirt and suspenders, who is holding what appears to be a webless workman’s glove which was last used circa 1900.

Image remains in near mint condition, with the mounting grading a conservative excellent condition due to slight soiling from handling on the borders. LOA Troy R. Kinunen / MEARS Auctions

Measuring 7.5”x11” on 10”x12” Tri-Bordered Decorative Mount. Photographers stamp on reverse. 13 young players depicted along with manager wearing civilian clothes and hat. Mix of “C” and “Canterbury” uniforms. Two players are holding award plaques and two trophy cups are displayed on the floor. Players can be seen wearing high top baseball cleats. A trophy baseballs painted ’21 can be seen carefully placed inside the catcher’s mitt. Player on far right is wearing a 1” web glove on his right hand while holding a bat.

Reverse is stamped, “Arthur S. Adams, Photographer, 421 Main Street, Worchester, MASS., June 17, 1921”. Some back damage on reverse which does not affect the structural integrity of the photo. Actual image remains in near mint condition, with some damage and trimming of the edges to the mount. Heavy crease on right border. LOA Troy R. Kinunen / MEARS Auctions

Measuring 8”x10” on 12”x14” decorative mount. 15 players depicted, and surrounded by detailed shots of vintage baseball equipment. An interesting note is that the players are wearing team issued uniform shorts, similar to the pants Bill Veeck would introduce to the White Sox 50 years later. First three kids seated in the front are wearing button back 1” web workman’s gloves. 4th kid is wearing a catcher’s mitt on his left hand. The next kid on the right is wearing a white buckskin fielder’s glove, and the final kid wears a black 1” web fielder’s glove. The large boy in the back row has a fob on hanger adorning his belt. Front lower center depicts criss cross bats holding a catcher’s mask. One of the bats has a visible mushroom knob. 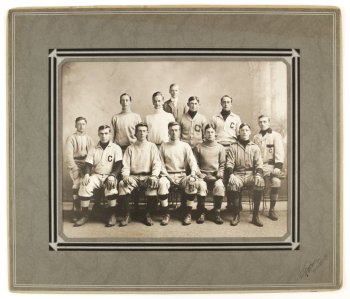 Players are wearing to distinct jerseys styles and two different team sweaters. First uniform style is the ¾ button down with “C” on left breast pocket. Second style is the full button down with left breast pocket with no letter. Player on far right is wearing a full sleeve length wool sweater with large collar and big button up front. 5 of the players in the first row are wearing full web fielder’s gloves. The fourth player from the left is wearing a catcher’s mitt.