And just when you thought Classic Auctions was done with announcements, we are extremely proud to announce that our special 25th anniversary auction will feature items from the personal collection of HOF member Ray Bourque! Consignments for our Special 25th Anniversary Auction are now open and will close on July 30th 2019.

As the current record holder for most career goals, assists, and points by a defenceman in the National Hockey League, there is only one word that can describe Ray Bourque’s career; phenomenal. Bourque not only won the Stanley Cup on his final NHL career game, but he was also selected on 13th different first All-Star teams (the most in history), won the Norris trophy 5 times and holds the record for shots on goal in a career with a stunning 6,206 shots! 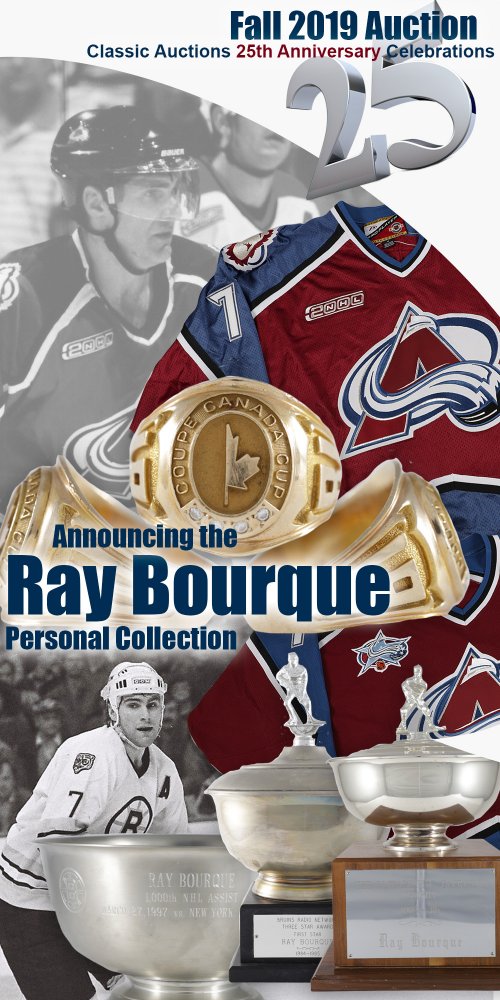 The Ray Bourque Collection will include a variety of rare items such as important game-worn jerseys, many championship rings, many of his trophies and awards, some milestones sticks and more. More information about the collection will be made public over the next few weeks.

Again, all items were obtained directly from Ray Bourque and will be offered for the first time to sports memorabilia collectors. All items will be available for bids in our upcoming Fall 2019 Auction.

A FEW ITEMS FROM THE RAY BOURQUE COLLECTION:

All these items and more will be available for bids in our upcoming Fall 2019 Auction.

Our Fall 2019 Auction will be part of our 25th Anniversary celebrations and already promises to be very special with a series of important announcements coming up over the next couple of weeks, consignments are now open AND WILL CLOSE ON JULY 30!