It’s that time of year again when REA is getting ready to open another blockbuster auction! The Fall Auction opens in approximately two weeks and will feature more than 2,800 lots spanning all areas of sport and non-sport. Catalogs will mail starting October 6, so please be sure to log in to your account today and update your mailing information to ensure that you receive the catalog in a timely manner!

If you’re not on our catalog mailing list or haven’t placed a bid in one of our past auctions, you can request a free catalog by going to our website.

REA will be set up at the Philly Show this weekend in Valley Forge, PA. Stop by booth 911 to view some of our incredible highlights and chat with our representatives! For more information, visit www.phillyshow.com. We will be accepting consignments for our “late additions” section of the October auction as well as accepting early consignments for the Spring Auction.

Stay tuned to our website and our Facebook page for more updates in the coming days as we show off some more highlights prior to opening day!

Also please remember that REA is committed to eliminating the auction closings that force bidders to stay up until 5 or 6 AM or even longer sometimes. This is a thing of the past! For more information on how we changed our auction closing method last year, please visit our blog. We know bidders appreciate this change and we hope it becomes the norm!

There is, perhaps, no event more anticipated than a Robert Edward Auctions sale, so anxious collectors can take great delight in knowing that the company’s Fall Auction is around the corner and boasts the greatest number of lots in company history. Scheduled to open for bidding October 6 and running through October 29, REA’s Fall Auction will feature more than 2,800 items from all corners of the collecting world. “We are thrilled that REA continues to be an industry leader in bringing high-quality items to auction, and this year’s Fall Auction will be no exception, with our largest selection ever,” said company president Brian Dwyer.

Bidders will need to look no further than lot #1 in the auction to see the impressive nature of this year’s consignments. A stunning 1916 M101-4 Sporting News Babe Ruth rookie card graded PSA 7 kicks things off with a starting bid $100,0000. Ruth cards of all varieties have climbed to staggering heights, but the rookie cards continue to be the focus of many high-end collectors seeking the best of the best. Keeping with the Ruth theme, all four 1933 Goudey cards of the Bambino are available for consideration in PSA 8 grade, and a signed example of #181, authenticated by PSA/DNA, is in there for good measure. A newly-discovered example of the 1915 Boston Red Sox team postcard featuring a young Ruth in the center is also available for the first time ever. One piece with a tremendous story, is a game-used bat dating to 1931 and signed by the famous slugger before he presented it to a friend of his, the doorman at a famous New York City lounge. An array of Ruth signed items, including several baseballs, and Type 1 photographs, including a superb rookie-year composite and the first recorded image of Ruth wearing number 3, round out the offerings. 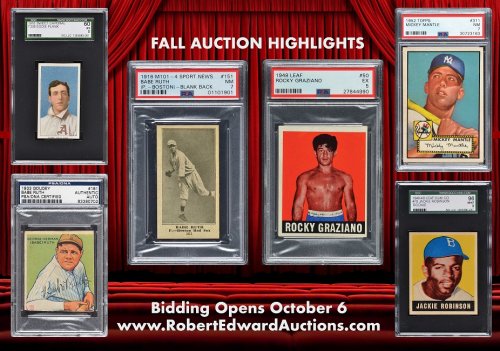 REA will be breaking up several high-grade sets throughout the auction, including the number ten ranked 1952 Topps baseball set (from which the PSA 7 Mantle originates) and a PSA 8 or better 1951-1952 Parkhurst hockey set. Countless other complete sets, graded and ungraded, spanning the early 1900s to the present day will also be offered. A large offering of authenticated wax and cello packs, boxes, and cases have been consigned from several different sources, some of which are being offered for the first time publicly. A very exciting find of a 1958 Topps Football wax box, complete with 24 packs, including one showing the key Jim Brown rookie card on the reverse, has unopened collectors chomping at the bit.

As always, there is no shortage of fresh-to-the-hobby material, including an incredible find of Turkey Reds, all of which have the extremely rare “Checklist – No Offer” reverse. Graded by SGC, these cards had not seen the light of day in decades and are highlighted by a Near Mint 84 Christy Mathewson, an EX-MT+ 82 Cy Young, and an EX 60 Ty Cobb. All cards #1-50 are present and grade from VG-EX to Near Mint. Several other original-owner collections ranging from tobacco cards to the 1950s yielded some gems and their exciting stories will be told in the pages of the catalog.

Hundreds of non-baseball lots round out the card offerings with two notable highlights emerging from the crowd. One of the auction’s featured items will be a full set of 1932 U.S. Caramel “Presidents” complete with the legendary William McKinley rarity! REA is no stranger to this incredible non-sport card, having sold three of the fewer than ten examples known to exist, including the Fall 2014 sale of the hobby’s highest-graded example for a record $96,000 price. Each of the thirty-one cards in the set has been graded and encapsulated by SGC. The complete set is further distinguished by the fact that it is an entirely stamp cancelled set, very likely kept together for the last 85 years since having been redeemed by the manufacturer in exchange for the prize a complete set earned tenacious youngsters. Also presented will be a PSA 5 example of the 1948 Leaf Boxing set’s legendary rarity picturing Rocky Graziano. One of only two examples graded at this level, and one of fewer than ten examples known to exist, the card has always been of great interest to collectors and ranks high on many collectors’ wantlists both in and out of the boxing-card world.

For memorabilia collectors, the offerings are equally as impressive, with several game-used bats leading the way. In addition to the previously mentioned 1931 Babe Ruth bat, which grades PSA GU9, the auction features stunning examples of lumber used by Mickey Mantle, Jackie Robinson, Joe DiMaggio, Hank Aaron, and Derek Jeter. Mantle’s bat grades an unimprovable PSA GU10 and features the slugger’s #7 ideally on the knob of the bat. Robinson’s bat is also significant for its iconic #42 on the knob of the bat, one of the few known with such a trait. The bat dates to 1953 and grades PSA GU9. A 1958 Mickey Mantle jersey, one of the few 1950s flannels available from Mantle’s playing days, and a 1962 Jim Brown jersey are two of the more significant game-used jerseys available.

A superb selection of Type 1 photographs, autographs, and other memorabilia dot the auction. A phenomenal Lou Gehrig signed and handwritten letter, responding to a young boy’s school project questions, has been consigned from a longtime collection. Ticket collectors will be treated to the largest and finest selection ever featured by REA. Dozens of important events are memorialized by tickets, including the first All-Star Game, the first and second Super Bowl, World Series games dating back to 1911, the first NFL Championship, and the Greatest Game Ever Played. Furthermore, many of these tickets are the highest-graded examples.

If sports aren’t your thing, there’s still a great selection of historical documents and music memorabilia that you don’t see every day. An Abraham Lincoln handwritten prisoner exchange order dating to 1865 is one of the more special pieces in this auction. Significant John F. Kennedy and Martin Luther King, Jr. letters are also available. The Beatles are represented with several pieces signed by all the members of the Fab Four. A Marilyn Monroe document, which bears one of the finest signatures ever penned by the actress and outlines her termination by 20th Century Fox, is also on the block.

According the Dwyer, the spike in consignments is attributable to several different initiatives undertaken by REA within the last year, two of which he views as critical to the company’s direction. REA exhibits at more shows than ever before, including an appearance this weekend at the Philadelphia Sportscard & Memorabilia Show in Valley Forge, PA. Dwyer said this year’s National Convention in Chicago was an unparalleled success, with more than seven figures in consignments coming in during the show’s five-day run.

Also key, according to Dwyer, is a change in the way that REA closes its auctions, starting extended bidding during the day, while the overwhelming majority of bidders are awake, and establishing a deadline by which the auction must close to prevent it from continuing into the early hours of the morning. This change, which REA was the first to debut in 2016 and which has been met with wide open arms by the collecting community since its implementation, is long overdue in Dwyer’s mind. “We live in a day and age that offers us the greatest technology to follow auctions at anytime from anywhere. The days of sitting attached to a landline with catalog in hand and bidding at 4 AM are so far behind us. We can do better, and we must do better for the sake of all involved.” Dwyer believes that collectors continue to speak with their consignments, and their wallets, as to which method they prefer. “Collectors appreciate that REA has gone out on a limb and tried to change the way that our hobby operates. We appreciate that they recognize the importance of what we’ve done.”

Anyone interested in more information on items in the auction is encouraged to visit www.RobertEdwardAuctions.com. First-time bidders may register online and free catalogs are available to anyone who requests them. The final day for bidding is Sunday, October 29.