REA’s blockbuster Spring Auction is now open for bidding!  With 2,600 items spanning all areas of sport and nonsport are up for bid, presented to REA’s massive worldwide audience.  “There are a lot of auctions out there, but there’s only one REA,” said company president Brian Dwyer. “We’ve been hearing from clamoring collectors waiting for us to fire up the auction for the last two months, and we’re excited to offer an incredible amount of eye-popping material this spring.” The auction will end Sunday, May 6, 2018.

Bidders can look no further than lot #1 in the auction to see the impressive nature of this year’s consignments. A stunning 1952 Topps Mickey Mantle graded PSA 8 kicks things off and is followed closely by a remarkable SGC 84 example of the Mick’s most popular card. Lots 2 and 3 feature rare-back examples of one of the hottest cards in the hobby today–Babe Ruth’s 1916 Sporting News rookie card with Gimbels and Standard Biscuit backs, respectively. Rounding out the top five is a true rarity, a 1917 Standard Biscuit Babe Ruth, one of only two examples graded by PSA and the first one we’ve offered in nearly two decades. 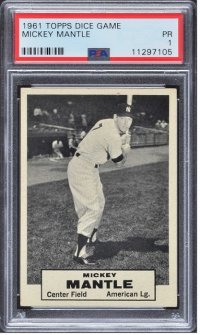 Featured memorabilia is also sure to turn heads, with a single-signed Babe Ruth baseball graded PSA 8 and a 1927 New York Yankees team ball with impressive signatures of Ruth and Gehrig. One of the finest Babe Ruth bats we’ve ever had the privilege of offering is also on the block: a 1932 game-used bat dating to late in the season of Ruth’s famous “Called Shot” graded MEARS 9.5 and PSA/DNA 8.5. Another autograph rarity is presented in the form of a 1935 Exhibits 4-in-1 signed by Ruth, Gehrig, Gomez, and Dickey. This same card realized $72,000 in our Fall 2016 auction, a record for a multi-signed card.

Topps rarities are sprinkled throughout the entire auction, many of which originate from one of the world’s finest postwar baseball card collections ever assembled. The only graded 1961 Topps Dice Game Mickey Mantle, an incredibly rare 1968 Topps 3-D Brooks Robinson prototype and uncut sheet featuring Roberto Clemente, and sample cards from some of the rarest Topps sets ever issued, including 1955 Topps Stamps, 1966 Topps Punch Outs, and 1970 Topps Cloth, are just a few. The three legendary rarities from the 1951 Topps Major League All-Stars set (Konstanty, Stanky, and Roberts) come to us from another longtime collector and are offered publicly for the first time in over a decade.

REA will be breaking up several high-grade sets throughout the auction, including a 1953-1954 Parkhurst Hockey set in PSA 8 or better, a 1948-1949 Leaf Baseball set in PSA 7, and one of the finest SGC-graded T206 sets ever assembled. That set, missing only Wagner, Plank, and Doyle, features stunning high-grade Hall of Famers, including Mathewson/portrait (SGC 84) and Cobb/green (SGC 70), as well as key rarities, like Magie (SGC 55), Demmitt (SGC 50), and O’Hara (SGC 60). Countless other complete sets, graded and ungraded, spanning the early 1900s to the present day will also be offered.

As always, there is no shortage of fresh-to-the-hobby material, including the second installment of an incredible find of Turkey Reds, all of which have the extremely rare “Checklist – No Offer” reverse. Graded by SGC, these cards had not seen the light of day in decades. Several other original-owner collections ranging from tobacco cards to the 1950s yielded some gems and their exciting stories will be told in the pages of the catalog. 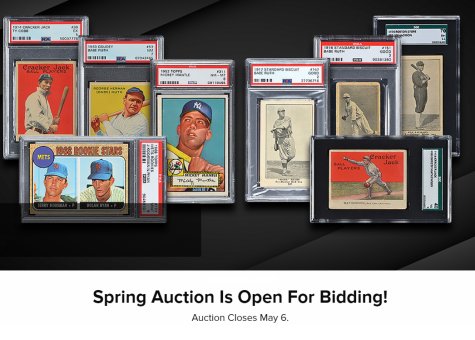 A superb selection of Type 1 photographs, autographs, and other memorabilia dot the auction. A phenomenal Lou Gehrig signed and handwritten letter, responding to a young boy’s school project questions, has been consigned from a longtime collection. A comprehensive Hall of Fame signed check collection will be offered in more than four dozen lots. Select items from the collection of Chicago Cubs pitcher Lon Warneke are offered for the first time publicly. An incredible selection of Negro League related items and display pieces are also available for consideration.

Once again, REA will employ its revolutionary and very successful auction closing method, with extended bidding beginning at 12 PM EST on Sunday, May 6. Starting in 2016, REA switched to ending the auction during the day, when collectors are awake, rather than continuing to use the antiquated closing method that dragged auctions out until 4 AM or later. “We are pleased to see that some other auction houses are taking note of our success with this method and making changes to their auction closings. There is absolutely no reason in 2018 for an auction to be ending at 4 AM or 5 AM in our opinion,” said Dwyer.

Anyone interested in more information on items in the auction is encouraged to visit www.RobertEdwardAuctions.com. First-time bidders may register online and free catalogs are available to anyone who requests them. The final day for bidding is Sunday, May 6. 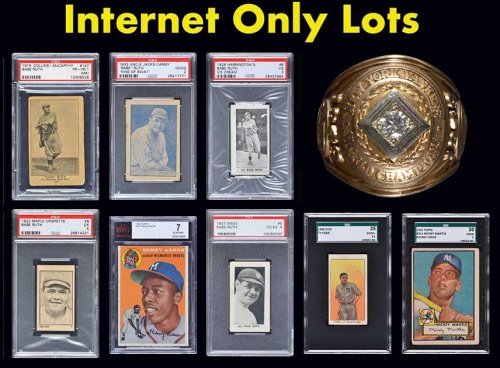 There are some great items that do not appear in our printed catalog and only viewable online! Be sure to check out these late additions, which include a 1949 Yankees World Series ring, newly-discovered cards, and a host of Babe Ruth rarities!