“Although our U.S. Coin sales declined, Heritage again outsold all other auction firms combined in that category,” said Co-Chairman James Halperin. “Meanwhile, 2017 was a tremendous year for expansion, profitability and growth across almost every other category we serve. We’ve become the world’s market leader in several 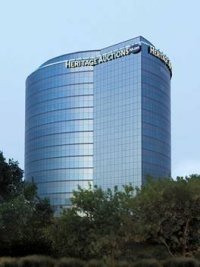 Increasing access to the firm’s 40 collecting categories, Heritage opened an office in Chicago and an office and gallery space in London, joining Paris, Geneva, Amsterdam and Hong Kong in the firm’s international footprint. Auctions have originated in Hong Kong since 2015, and the firm will hold its first European Comics & Comic Art auction from its Netherlands saleroom in April.

Sales of U.S. Coins remain the firm’s largest category, with 2017 auction totals exceeding $169 million (an average of $306,000 in sales per week), outselling all other numismatic auction houses combined, according to the Professional Numismatists Guild 2017 annual survey. High-profile sales in World & Ancient Coins – one of the auction house’s fastest-growing categories – surpassed $49 million, the category’s second-best year ever.

Heritage Auctions’ Make Offer to Owner (MOtO) service, a proprietary program in which clients make anonymous offers to purchase items previously sold at auction, enjoyed a record-breaking year in 2017 as sales surged to more than $10 million.

“This program combines two of the features clients consider most important: quickness and security,” Heritage Auctions Co-Chairman Jim Halperin said. “It allows a quick way for a customer to continue pursuit of a missed auction item, and does so through a safe, efficient process that benefits both sides of each transaction.”

The top seven MOtO sales yielded a six-figure return; seven of the top 10 lots sold during 2017 were sports collectibles and memorabilia.

Clients who enroll in Heritage’s MOtO program have the opportunity to bid on items in select auctions within 72 hours after the conclusion of the sale for all items that have been in inventory for more than 30 days. Those who make an anonymous offer will have their information transmitted by Heritage to the lot’s owner, who then has the option of accepting or rejecting the offer, or presenting a counteroffer for the MOtO client’s consideration. Heritage retains 10 percent of the total price as a commission and waives all credit card and/or PayPal fees. Transactions are managed through HA.com, which protects the privacy of all parties. Lots can be returned during a seven-day window, after which MOtO transactions are binding.