A restored copy of the famed T206 Honus Wagner sold for a record price of $420,000, as Memory Lane wrapped up its Holy Grail Rarities Auction. Graded ‘Authentic’ by PSA, the card’s history can be traced back some 50 years. It last sold in a public auction in 2011 for $188,000. The price attained by Memory Lane makes this copy the most expensive Authentic example ever sold. Sixty-nine bids were made between the auction opening on November 19 and the late Saturday/early Sunday night close on December 15, 2018.

The auction also included the number 2-rated 1962 Topps Baseball Master Set on the PSA Set Registry. The 613 cards were sold individually for an aggregate total of $285,557. Every card offered was graded 8 or higher, with the vast majority at PSA 9 or 10. Leading the pack was the only Harmon Killebrew card ever to reach a 10 grade, which sold for $13,781.

The only signed 1928 Lou Gehrig Exhibit card on the PSA Population Report, one carrying ‘9’ autograph grade was the second highest-selling lot in the auction, netting $76,800—a record price for any Gehrig signed card offered at public auction.

In all, auction proceeds totaled over $2.67 million. All prices include a 20% buyer’s premium. 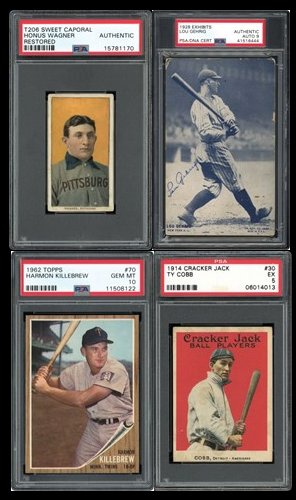 Pre-War era cards drew plenty of interest from bidders. A 1914 Cracker Jack Joe Jackson graded PSA 3 closed at $47,376, setting a record for the card in that grade.

Collectors of the M101-5 set had the rare opportunity to land one of only six known copies of the short printed Bobby Wallace card. Graded 6, it sold for a record-smashing $22,735. Wallace was replaced by Zach Wheat not long after the presses began to roll.

High-end cards of a much more recent vintage take a backseat to none in the current market and MLI’s auction had a pair of standouts. A 2009 Bowman Chrome Gold Refractor Mike Trout autograph (# to 50) sold for $44,400 while a 2007-08 Exquisite Kevin Durant rookie auto reached $41,380.

For complete results and to get information on consigning to the company’s Spring Auction, visit Memory Lane’s website.