Records Fall in Small Traditions Exclusive 100-Lot Summer Premium Auction. We also invite you to consider consigning at 0%, your sports and non-sports trading cards and other collectibles to one of our upcoming 2015-16 monthly auctions, detailed below.

With massive support from the collector community, including over 20,000 fans on Facebook, Small Traditions LLC has been conducting its Monthly Masterpieces Plus (MM+) auctions since 2012, offering a 0% consignment rate to our customers on consignments numbering up to 100 pieces, as an alternative to selling on eBay and through other higher-priced auction services.

We also offer a collection management service through which we will liquidate entire collections for a reasonable fee ranging from 10-20%. Finally, our most popular program, our Cost-Free Grading initiative, allows consignors to submit raw (or ungraded) cards for review by the Small Traditions staff, who then use their expertise to help consignors determine whether their cards are worth the time and expense of professional grading with PSA, SGC and/or BGS, the hobby’s leading third-party grading and authentication firms. Small Traditions pays for all shipping, insurance, grading and listing costs up front, and we only charge our customers their discounted grading fees after the eventual sale of their items.

In addition to these compelling consignment programs, every fourth month’s auction at Small Traditions features our trademark Exclusive 100-Lot Premium Auction, in which all lots are valued at a minimum of approximately $1,000, and each receives an engaging and scholarly description composed by the academics on the Small Traditions staff, two of whom are in fact college professors. Small Traditions owner Dave Thorn has taught composition, literature and creative writing at Union County College in New Jersey and Red Rock Community College in Colorado, and Dan McHale teaches history at the State University of New York.

Small Traditions’ recently concluded Summer 2015 Premium Auction established several new records on file at VintageCardPrices.com for a number of iconic Michael Jordan, Mickey Mantle, Derek Jeter, and Mike Trout cards. To bidders and other followers of Small Traditions, which now number over 20,000 on the company’s Facebook page, this came as no surprise, as the auction featured selections from the legendary DrPSA Michael Jordan Fleer Showcase Collection. For nearly two decades, the DrPSA collection has been known to contain several of the single finest Michael Jordan Fleer cards in existence, and the prices did not disappoint. 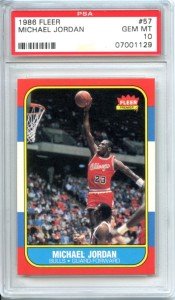 A PSA 10 Gem Mint example of the iconic 1986 Fleer #57 Michael Jordan rookie card led the way with a final price of $19,586, the highest price ever paid for a PSA 10 example of the Chicago legend’s rookie card since VintageCardPrices.com began aggregating eBay and other auction prices in 2006. While Small Traditions would like to claim the auction listing as the highest price ever realized for the card, Dr. Stephen Hlis (AKA, DrPSA) has reported several PSA 10 sales that he personally conducted in the late 1990s and early 2000s in excess of $33,000, a clear indication of the iconic card’s renewed potential.

As with Dr. Hlis, Small Traditions owner Dave Thorn expressed satisfaction with the strong results, but stated his belief that the card could easily have cleared $20,000. “Not all PSA 10s are the same,” he commented. “Some show fuzzy edges or marginally imperfect centering, and those have been averaging between $16,000 and $18,000 over the last six months. Also, a handful of the half dozen BGS 10 Pristine copies in existence have sold for over $100,000, and this copy was every bit as nice as those, so from our perspective, the winning bidder, a well-known collector within the hobby, scored a relative bargain.” With a strong upward trend in prices realized for the hobby’s very best cards, both Thorn and the high bidder indicated their predictions that the 1986 Fleer #57 Michael Jordan rookie card could easily top $20,000 to even $25,000 by year’s end.

That’s a lot of money for a basketball card from the 1980s, but most collectors are well aware of Fleer’s limited print run, with estimates ranging from as low as 60,000 to as high as 125,000 copies of each 1986 card produced. All of those cards are well known to be condition sensitive, and the Jordan card, being so popular, has yielded just 220 total examples in the PSA 10 Gem Mint grade in nearly 20 years of professional third-party card grading. From an investor’s viewpoint, it’s an ideal item to stockpile. It might take a few decades, but the card will eventually be a six-figure item at some point in the future.

Some other noteworthy sales from the DrPSA Michael Jordan Fleer Showcase Collection, almost all of which established new sales records, included the following:

In addition to these impressive prices for Michael Jordan cards, several of the following items from Mickey Mantle, Derek Jeter, and Mike Trout also approached and topped existing sales records:

Thanks, as always, for supporting Small Traditions,