“To have 14 books each realize more than $100,000 is extraordinary,” Heritage Auctions Comics & Comic Art Director of Operations Barry Sandoval said. “The performance of these lots shows that the demand is there for exceptional, high-end comics. Our bidders went after books of the highest quality and collectible value, and they got them.” 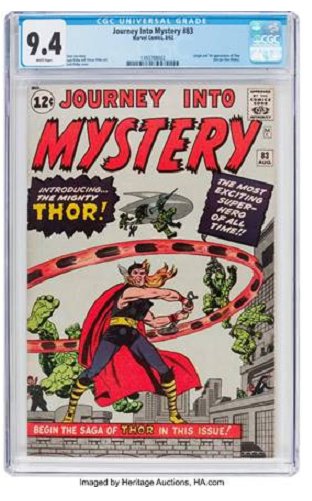 Seventeen bidders made their pitch for the auction’s top lot, Journey Into Mystery #83 (Marvel, 1962) CGC NM 9.4 White Pages – Thor’s first appearance, with interest perhaps fueled by the new Thor: Ragnarok movie – before it finally hammered at $191,200. Considered the fourth-most valuable Silver Age Marvel comic, it is the second-highest grade of this issue ever offered through Heritage Auctions, thanks in part to its white pages. The origin and first appearance of Thor on the cover and in the interior were done by Jack Kirby; backup story art was done by Steve Ditko.

Another lot that drew heavy bidder activity was Detective Comics #33 (DC, 1939) CGC VF  8.0 Cream to Off-White Pages, which rose all the way to $167,300. Batman’s origin issue is recognized as one of the hottest Golden Age comics, this issue is ranked No. 16 on Overstreet’s 2017 list of the “Top 100 Golden Age Comics” and carries an uncommonly high grade for this issue.

More than tripling its pre-auction estimate, more than a dozen bidders made a play for Robert Crumb Your Hytone Comics Complete 8-Page Story Original Art (Apex Novelties, 1971) before it ultimately realized $167,300. The story marked the beginning of a dark time for Crumb, who was dealing with a marriage that was on the rocks and an onslaught of hangers-on and promoters who drove him out of California.

A copy with the second-highest grade ever offered through Heritage Auctions of Fantastic Four #1 (Marvel, 1961) CGC VF/NM 9.0 Off-White to White Pages brought $161,325. Ranked No. 3 on Overstreet’s “Top 50 Silver Age Comics” list, Fantastic Four #1 clearly launched the Marvel Age in 1961, paving the way for Spider-Man, Iron Man, Thor, the Hulk and many other superheroes and contains the origin and first appearance of both the Fantastic Four, Marvel’s first superhero team by the team of artists Stan Lee and Jack Kirby, and of Mole Man.

Showcase #4 The Flash (DC, 1956) CGC VF+ 8.5 White Pages is a sparkling copy that drew more bids (22) than any other among the top 10 lots, ultimately drawing a return of $155,350. The sale came in the same week as the Flash’s silver screen debut in Justice League. The issue marked the launch of the Silver Age of Comics when DC updated one of its most popular superheroes from the Golden Age and assigned Carmine Infantino, who had been the Golden Age’s Flash artist when the speedster was seen last in 1949. The issue is ranked No. 4 on Overstreet’s “Top 50 Silver Age Comics” list and has enjoyed a recent resurgence in collector demand.

Arguably the highlight of the Silver Age keys in the auction, Tales of Suspense #39 (Marvel, 1963) CBCS NM+ 9.6 White Pages drew the attention of numerous bidders until it ultimately went for $155,350. The issue is coveted because it contains the origin and first appearance of Iron Man. With cover art by Jack Kirby and Don Heck and interior story art by Heck, Steve Ditko and Gene Colan, this issue is No. 8 on Overstreet’s “Top 50 Silver Age Comics” list.