The only “master set” of baseball cards from Roger Maris’ career is being broken up and sold as part of Memory Lane’s Winter Rarities Auction, slated to open Friday, December 23.

The “61 in 61” collection, painstakingly pieced together by a private individual over a period of many years, includes a complete run of Maris’ regular issue cards, all in high grade and also numerous examples of rare regional issues, many of which rank as the best examples known. 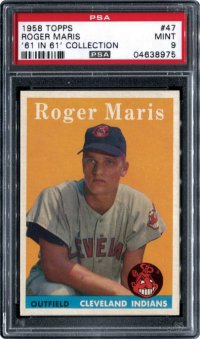 As a whole, the collection ranks as the current highest rated master and basic set on PSA’s Set Registry. It’s the only Maris collection on the list that includes all 114 cards issued during the career of the popular slugger, who broke Babe Ruth’s single-season home run record with 61 in 1961.

As a whole, the set accumulated a 7.17 G.P.A. with 16 cards achieving the perfect “Gem Mint 10” Grade and 26 cards rated PSA 9. More than half of the cards are the highest graded specimens (none higher).

The owner of the set collected not only for completeness but was also very particular about the grade of each card, focusing on both technical grade and eye appeal.
While the collection includes a PSA 9 Maris rookie, collectors will have a chance to bid on some seldom seen examples of other early Maris cards in high grade including the rare 1957 Sohio Gas card issued a year before his first bubble gum card (PSA 8) and one of only two graded examples of the ultra-scarce 1956-1961 Kansas City Athletics Photocards featuring Maris. Also up for bid are both examples of the 1958 Armour Bacon cards that were issued for Maris to sign while making an appearance at a local grocery store. 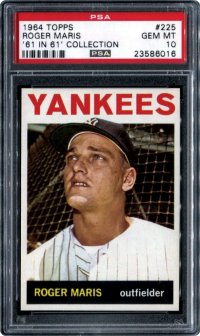 honoring Maris, Yankee team issues, Topps Venezuelan cards, Jay Publishing, 1961 and ’62 Bazooka, Post Cereal and Jello cards including the LIFE Magazine insert and Salada and Shirriff Coins, among many others.

There is also a 1967-68 Cardinals postcard autographed by the late slugger from North Dakota and a single-signed Maris ball.

In all, the Winter Rarities auction includes over 1,300 lots of all types of sports cards and memorabilia. Printed copies of the 262-page catalog are available by contacting Memory Lane via their website or by phone at 1-877-606-LANE (5263).