The world’s largest collectibles auctioneer presents the most coveted hardware in American sports in its latest sports collectibles catalog auction, now open for bidding at HA.com/50019. The Heisman Trophy awarded to University of Texas Longhorns’ running back Ricky Williams in 1998 is expected to sell for a half-million dollars or more to lead the diverse offerings of the sale. The Walter Camp and Doak Walker awards issued to Williams the same year will likewise tempt gridiron collectors.  2 – Sports Collectibles Session
(Lots 53820-54232) – 10:00 PM Central Time, Friday, October 25, 2019.  (Internet bidding closes at 10:00 PM Central Time the evening the session begins, with extended bidding available.)

The auction will close as the League Conference Championships near their conclusion, a perfect time to release to the collecting public the No. 1 set of World Series tickets on the PSA Registry, featuring a single ticket (nearly all unused) for every year from 1909 to 2018. High-grade Championship rings celebrating the World Championship glory of the 1990 Cincinnati Reds, the 2009 New York Yankees and the 2013 Boston Red Sox will also find new owners in the auction’s first session. 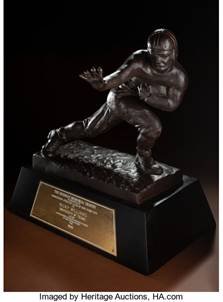 Autograph collectors will find much to love in the sale, notably rare and high-grade single signed baseballs from the likes of Christy Mathewson, Mel Ott and Jimmie Foxx, and a signed complete set of Ted Williams’ famous 1959 Fleer set.