Consignments from five private collections, including one of the most comprehensive private compilations of Robert E. Lee photographs (many of which are signed by Lee) ever assembled, will be among the highlights in Heritage Auctions’ Americana & Political Auction May 4-5 in Dallas, Texas.

“The Dr. Donald A. Hopkins collection of Lee photos is remarkable both for its depth and breadth,” Heritage Auctions Americana Director Tom Slater said. “The auction includes some 100 lots, many of which contain multiple images, and includes numerous signed photos, rare poses, and images by noteworthy photographers both North and South.” 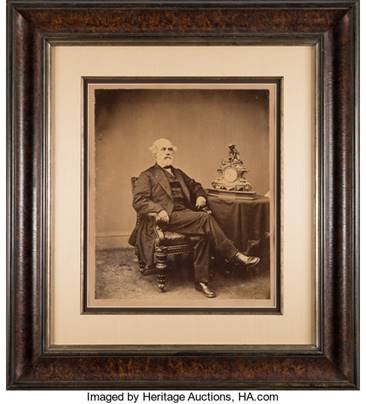 A diligent scholar of his subject, Dr. Hopkins authored the book Robert E. Lee in War and Peace, which is extensively illustrated with examples from this collection.

Among the top lots in the auction from the collection of Dr. Hopkins:

Other diverse categories strongly represented in the auction include political and presidential collectibles, Old West artifacts, items from the early days of the Woman’s  Suffrage movement, and antique advertising.  A rare Punch Cigar Store Advertising Figure Cast in Zinc, Circa 1885. Fashioned in the form of one half of the Punch and Judy puppet show, the Punch figurine remains the most elusive for collectors, and rarely comes to the auction market in such exceptional condition. Depicting Punchinello, the Lord of Misrule, with cigars in his right hand, the figure has “Wm. Demuth & Co. Manufacturers New York” cast in the base. A notorious distributor of pipes and cigar store trade figures, Demuth entered into a partnership in 1863 with Brooklyn-based foundry operator Moritz Seelig, to produce cast metal trade figures to sell through Demuth’s catalog.

In addition, General George Washington’s “Christmas Miracle” Crossing the Delaware and the Stunning Victory at Trenton is one of what is believed to be only three known copies of this exceptionally rare broadside hand-bill, titled “Fresh Advices from the Westward…” from the office of The Providence Gazette. American newspapers traditionally did not print Sunday editions in the 18th century because of the Sabbath, but the magnitude of the news in this rarity justified an exception to the rule. The only two other known copies are housed in the Rhode Island Historical Society and at the American Antiquarian Society. This is believed to be the only copy ever to sell publicly, having appeared in the American Art Association’s 1921 sale, “Americana Rarissima: A Notable Selection of Books, Broadsides, Letters.”

Other noteworthy offerings include:

Henry Clay: A Marvelous Rare and Highly Distinctive 1844 Campaign Flag Banner is the first example of this flag seen other the one pictured in Threads of History, which now

resides in an institutional collection. The flag features a unique “folk art” portrait of Clay, and each corner of the canton contains part of the slogan “A Natural Currency / Revenue and Protection / Encouragement to Agriculture / Manufactures and Commerce.”

James Butler “Wild Bill” Hickok: Perhaps the Most Important Known Autograph Letter Signed from this Old West Legend set a world record when it was purchased for $190,400 at auction by the consignor in 2003. Hickok wrote the letter to his wife, Agnes, in June 1876 at Omaha, Nebraska, where he was trying to put together a prospecting expedition to the Black Hills. He wrote the letter just a month before he was fatally shot by Jack McCall while playing poker, as he held a hand – aces and eights – that became known as the “dead man’s hand.”

John A. Sutter: A Superb Engraved Sword Presented to this Famous California Gold Rush Figure by the Sutter Rifles Militia Group is one of the great early California relics, having sold in 2008 for $172,000. Sutter owned the mill where James Marshall first discovered gold in 1848, and rose quickly to prominence, becoming one of the faces of the California Gold Rush and then becoming a (perhaps honorary) general in the California state militia. A unit known as the Sutter Rifles presented him with this sword, the scabbard of which was engraved with “Presented to Major General John A. Sutter / by Captn / A. Andrews / Sacramento City 1853.”

Zachary Taylor: Only Known Example Campaign Banner for the 1848 Whig Candidate and 12th President is in the style of campaign banners that attained extreme popularity in the 1840 and 1844 political seasons, but many seemed to disappear during the following two presidential elections. They enjoyed a resurgence in 1856 and rode the new wave of popularity through the remainder of the 19th century. This is the only example that Heritage Auctions ever has seen, in private or public collections, making this one of the most important political flags ever to reach the auction market. The flag is emblazoned with “Brave Old Zach” on the front, and “He protected the children” on the back – almost certainly a reference to the first event which brought Taylor national attention – as an officer in his first battle in the War of 1812, he commanded Fort Harrison, which came under attack by Indians who were siding with the British. Taylor rallied the troops, fending off the attack while allowing no harm to the women and children.

Among the 995 lots in the auction are more than three dozen Texana lots, including:

In the  Woman’s Suffrage category, the auction features the widely respected collection of Jeannine Coup of Lancaster, Pennsylvania, the founder and editor of The Political Bandwagon, which reports on activity in the world of political items collecting. Highlights include: