SCP Auctions is proud to announce that it has secured the personal memorabilia collection of former NFL great Rod Woodson. The Hall of Fame defensive back’s coveted lineup of game-used jerseys, AFC Championship rings and multitude of accolades and trophies will hit the online auction block on Wednesday, April 8, at www.scpauctions.com.

It features nearly 70 lots of Woodson’s most prominent items including dozens of game balls from his alma mater (Purdue) as well as his 17-year pro career, various MVP awards and his NFL 75th Anniversary All-Time Team trophy which he was awarded in 1994.

“I was blessed with a long career in the NFL,” said Woodson, who now serves as assistant defensive backs coach for the Raiders, “and I was able to acquire quite a few mementoes from my playing days. Now I feel good about consigning with SCP Auctions and sharing these with passionate football fans and collectors who would be interested in adding them to their collections.” 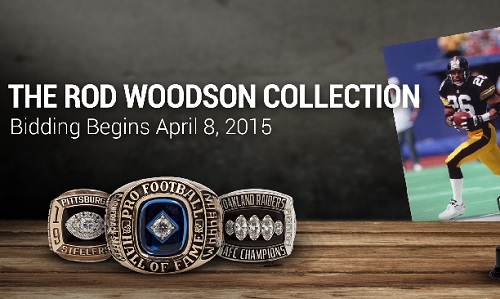 Selected in the first round of the ‘87 NFL Draft by the Pittsburgh Steelers (No. 10 pick overall), Woodson made a huge impact in the Steel City. For 10 seasons Woodson was one of the NFL’s most feared corners as he recorded 644 tackles, made 38 interceptions (five returned for touchdowns) and recovered 21 fumbles. In 1993, he was named the NFL’s AP Defensive Player of the Year. A six-time First-Team All-Pro selection, he was named to the Pro Bowl 11 times, setting a record for defensive backs. He won his only Super Bowl title as a free safety with the Baltimore Ravens in 2000 and completed his career with the Oakland Raiders in 2003. He finished with 71 interceptions (third best overall) and still owns the NFL record with 12 picks returned for touchdowns. To no one’s surprise, he was elected to the Pro Football Hall of Fame in 2009, in his first year of eligibility.

“To say we are ecstatic to have Rod’s collection would be an understatement,” said SCP Auctions President David Kohler. “As hard-hitting and prolific a player as Rod was on the field, he’s genuinely a very nice guy off it. He’s been a pleasure to work with.”

Bidding is open to registered bidders only and starts on Wednesday, April 8, and concludes on Saturday, April 25. The auction is being conducted online at www.scpauctions.com. For more information on how to participate, please call 949-831-3700.