RR Auction’s Marvels of Modern Music auction (July 12-19) garnered top prices for its consignors. Autographs, albums, guitars, equipment, and personally owned clothing and jewelry were hot sellers.  The Boston-based auction house, established in 1976, has had great success with the legendary names of music at auction. From the Beatles to Prince, from bluesmen to stadium rockers.

RR is currently seeking fresh items for its upcoming November music auction as well; details on free appraisals can be found here. Be sure to select AuctionReport.com as where you found them.

Jump to all July auction results

Beatlemania
Fully signed Beatles autographed items were in high demand. A 1963 Parlophone mono first album pressing of “Please Please Me,” signed by all four Beatles, topped the list with a sale price of $30,671. Beatles success included a complete set of signatures on a 1964 menu from the specially-hired train used for the opening sequences of the Beatles’ debut film “A Hard Day’s Night,” which sold for $13,316; a Beatles set of signatures circa 1963, that went for $8,597; and Beatles autographs obtained in September 1967 on the set of the Magical Mystery Tour in Newquay, England (scarce, as the band had stopped touring the year before), which earned $7,227. A framed photo and signatures of the Beatles did well at $6,830, as did a framed and signed promo postcard display, which achieved $6,209. Also noteworthy was an incredibly rare original handbill for two Beatles performances as part of the “Big Beat Sessions” and “The Davy Jones Show” at the Tower Ballroom in New Brighton, Merseyside, on December 1 and 8, 1961. During this period, Pete Best was the Beatles’ drummer; Ringo Starr (as Richard Starkey) was the drummer for Rory Storm and the Hurricanes, also on the bill for both shows. That item sold for $4,716. 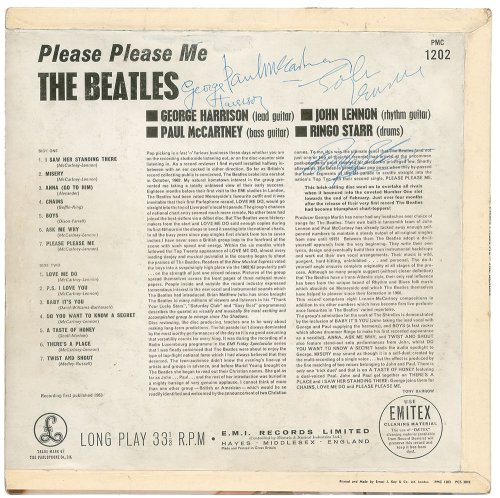 Featured musicians
CJ Ramone presented a collection of his own stage and tour gear from his days playing with punk pioneers The Ramones. His tour-used Ampeg bass amplifier head with original Ramones road case sold for $13,089; his stage-worn iconic black leather jacket garnered $11,272. A pair of sterling silver skull rings given to him by original bassist Dee Dee Ramone went for $10,492. And CJ Ramone’s tour- and stage-used black-bodied signature Mosrite bass guitar earned $8,485.

The family of Boston lead singer Brad Delp offered a cache of items from his remarkable career with the band, including his RIAA gold sales award for Boston’s self-titled debut album; it sold for $11,153.

RR Auction continues its success in selling Prince memorabilia. This time, Prince’s handwritten draft of the lyrics for “Mutiny” achieved $16,843; his handwritten lyrics for “Go” – in purple ink, with pen name Percy Bagonia – garnered $9,200; and his extensive handwritten notes for the cover art to his “Around the World in a Day” were sold for $7,892. Clothing, jewelry, and other items were also successful. 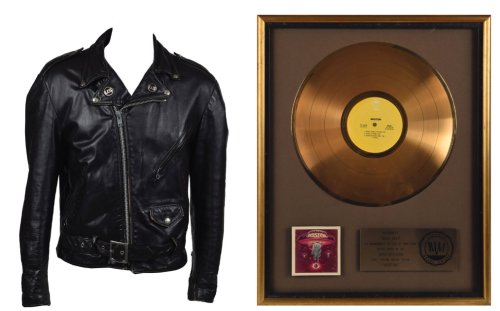 Rock n’ Roll icons
A rare ALS written by Bob Dylan in 1975 to folk musician Debbie Green, inviting her to sing on his upcoming “Desire” album, achieved $29,645. Read more about the item here. Dylan’s signed “Bringing It All Back Home” album also sold for $5,017.

Nearly every legendary band or musician was represented in the auction. Led Zeppelin items scored heavily. A fully signed “Led Zeppelin II” album – with Robert Plant adding “Frodo Lives” – reaped $27,621. An exceedingly rare signed vintage glossy photo of Doors frontman Jim Morrison, circa 1969, earned $26,348. A 1971 Sunderland Concert poster signed by The Who sold for $14,703; and a beautifully signed “Wish You Were Here” album, featuring autographs from all the members of Pink Floyd, went for $14,649.

RR Auction is currently inviting consignments for the next Marvels of Modern Music auction, to be held in November. Deadline for consignments is Aug. 27. Contact them today for a free appraisal.

Consign your music items in RR Auction’s next Marvels of Modern Music auction.