An extremely rare Henri de Toulouse-Lautrec manuscript will be auctioned later next month by New Hampshire based, RR Auction. The auction, which contains more than 1,500 items, began on Friday, January 24, and will end on the evening of Wednesday, February 12. More details can be found online at www.rrauction.com.

In this two-page autographed manuscript, in both French and Latin, Lautrec tells the legend of Hercules and Cacus, and includes sketches in his inimitable style. 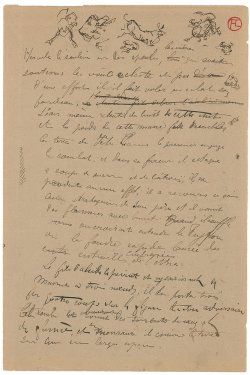 Manuscript reads in part (translated): “The face was horrible; his strength was matching his stature, his body was huge and this monster was the son of Vulcan. The dwelling was a cave with deep refuges, and so hidden that wild animals could hardly find it. Human heads and arms are nailed at the entrance; dried up ground is whitened by bones.

“While the world has come to recognize Lautrec as a master storyteller through his artwork, this remarkable piece shows him honing his skills in both word and image,” says Bobby Livingston, VP at RR Auction. “Bringing to life the figures of this epic tale— he gives new form to the centuries-old story.”

The document also includes his rare “Monfa” signature (the conclusion of his complete family name, Toulouse-Lautrec-Monfa, referring back to the village in southern France whence his descendants came).

Among the other museum quality items in the auction:

The auction, which contains more than 1,500 items, began on Friday, January 24, and will end on the evening of Wednesday, February 12. More details can be found online at www.rrauction.com.