RR Auction is proud to announce, as part of a joint venture with Animation Art specialist Harry Kleiman, owner of Collector’s Paradise Galleries, an eclectic collection of items for its first sale, later this month devoted entirely to Animation Art.

The nearly 500 lot auction’s foundation is based upon titan Walt Disney, consisting of over 300 pieces from the iconic studio. Our catalog expertly weaves together the tale of Animation, from Winsor McCay’s Gertie the Dinosaur, debuting in 1914, all the way up to the Simpsons animation of the 21st century.

The Disney portion of the catalog boasts a special section of Snow White material, including what is quite possibly her earliest known ‘Betty Boop’ version in fully realized cel form. The 1940 American animated film Fantasia is represented by a visually stunning concept painting of Mickey as the Sorcerer’s Apprentice conducting the universe. We also have several Pinocchio cels including two Jiminy Cricket key master setups.

Fantastic pieces of original concept art by Mary Blair and Eyvind Earle, especially a concept storyboard painting from Sleeping Beauty of Prince Phillip holding the ‘sword of truth’ as he battles Maleficent in dragon form, continue to bolster the Disney portion of the catalog. Also included are several nice pieces from Peter Pan, especially a production cel and background featuring Peter and Wendy flying hand in hand.

A highlight included from Fleischer Studios, is an exceptional production setup of Popeye and donkey from 1934’s Let’s You and Him Fight.

The Animation Auction from Boston, MA based, RR Auction opens for online bidding Aug 14, 2014 & ends Aug 21, 2014 at 7PM. More details, including a preview can be found online at www.rrauction.com.

A very early original preliminary production cel featuring Snow White from Snow White and the Seven Dwarfs, will be featured in an upcoming auction devoted entirely to Animation Art later this month, by Massachusetts-based RR Auction.

The Snow White cel was created circa 1935, shows the character wearing a long pink dress with a blue bow in her hair. This rarity is on a full animation cel, complete with peg holes and a cel number at the bottom right, not to be mistaken for a color model. 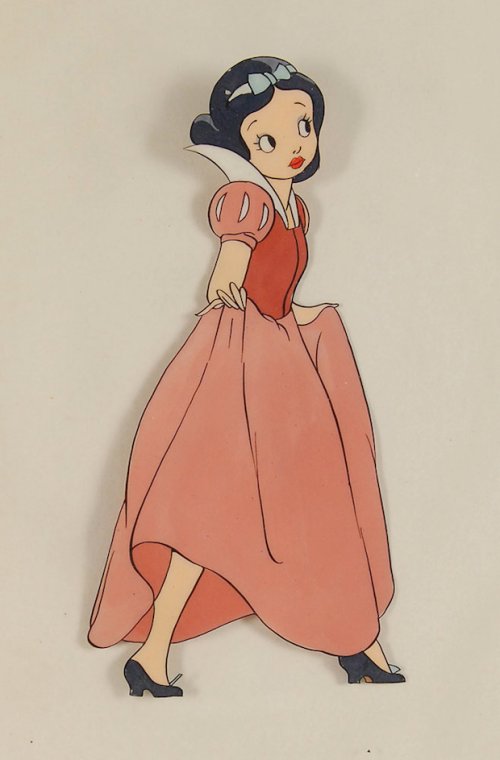 It is the first full-length cel animated feature film and the earliest in the Walt Disney Animated Classics series.

By the summer of 1936, friction had heightened between animators over portrayal of Snow White, as more of a sophisticated young temptress, one that did not match the charming innocence that Disney required.

“Walt Disney changed this design of the princess because he felt it was too ‘cartoony’—too risqué and reminiscent of Betty Boop—to be used for final production in a more serious film,” says Bobby Livingston, Exec VP at RR Auction.

“This considerable re-designing would result in the most perfect embodiment of the fairy-tale feminine ideal of purity and innocence that would be achieved in the film,” adds Livingston.

Among the other items featured in the Animation Art auction:

The Animation Auction from Boston, MA based, RR Auction opens for online bidding Aug 14, 2014 & ends Aug 21, 2014 at 7PM. More details, including a preview can be found online at www.rrauction.com.