Bid, view and register for the auction here.

An extremely rare, fully functional Apple-1 computer will be auctioned by RR Auction. Bidding for the Steve Jobs Auction from RR Auction begins March 5 and will conclude on Thursday, March 12. View the fully illustrated catalog on LiveAuctioneers.

The Apple-1 was originally conceived by Steve Jobs and Steve Wozniak as a bare circuit board to be sold as a kit and completed by electronics hobbyists, their initial market being Palo Alto Homebrew Computer Club. Seeking a larger audience, Jobs approached Paul Terrell, owner of the Byte Shop in Mountain View, California, one of the first personal computer stores in the world. Aiming to elevate the computer beyond the realm of the hobbyist, Terrell agreed to purchase 50 Apple-1 computers, but only if they were fully assembled. The Apple-1 thus became one of the first computers that did not require soldering by the end user. Altogether, over a span of about 10 months, Jobs and Wozniak produced about 200 Apple-1 computers and sold 175 of them.

This Apple-1 computer (above) was acquired by the SoftWarehouse, a computer store/franchise in Western Michigan, in the 1980s as part of a trade for a newer IBM machine. It was subsequently displayed in the store in a custom-made museum-style case, before being placed into storage. 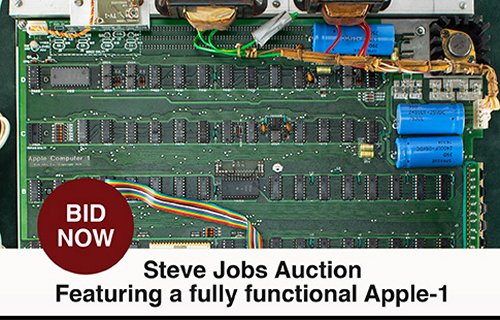 The computer was restored to its original, operational state in June 2019 by Apple-1 expert Corey Cohen. A comprehensive technical condition report prepared by Cohen is available to qualified bidders. Cohen evaluates the current condition of the unit as 8.0/10. The most remarkable aspect of this Apple-1 computer is that it is documented to be fully operational; the system was operated without fault for approximately eight hours in a comprehensive test. This Apple-1 was exhibited at the Computer History Museum in Mountain View, California, in 2019 for the Vintage Computer Festival West, and is documented on the Apple-1 Registry.

Included in the lot, is an original Apple-1 Cassette Interface (ACI), also introduced in 1976, which provides the ability to save memory contents onto a standard audiotape, and later load the contents back into the computer’s memory. Revolutionary for the time, Wozniak designed the ACI to use only 6 integrated circuits, compared to other solutions that used 50 to 100 integrated circuits. This allowed Apple to sell the product for less than their competitors. The Apple ACI also operated at four times the speed of its contemporary competitors.

The early success of the Apple-1 in 1976 paved the way for the introduction of the Apple II in the spring of 1977. In Apple’s 1980 IPO prospectus, the company described its progress: “In April 1977 the Company introduced the Apple II computer mainframe which was similar to the Apple I but incorporated additional circuitry and a keyboard, and was packaged in a plastic housing.” In other words, the Apple II built upon the Apple-1 to become an even more capable, more consumer-ready machine. Between 1977 and 1980, on the sales of the Apple II and its peripherals, accessories and software, Apple Computer’s yearly revenue grew from $774,000 to $118 million, making it one of the great growth stories of Silicon Valley.

“The Apple-1 is not only a marvel of early computing ingenuity, but the product that launched what is today one of the most valuable and successful companies in the world,” said Bobby Livingston, executive vice president at RR Auction.

RR Auction will also offer the lifetime collection of Jerrold C. Manock, an Apple product design engineer. After designing the Apple II computer, Manock joined the company full-time as Apple’s Corporate Manager of Product Design, Employee #246, leading the product design teams for the Apple III and the iconic first Macintosh computer. Today, Manock is regarded as the “father” of the Apple Industrial Design Language. His collection is highlighted by his Steve Jobs–signed contract for the Apple II, a bonus memo signed by Jobs, an early “In Appreciation” Macintosh computer, and patent plaques for the Apple III and Macintosh.

Among other items in the sale is a PowerBook 190cs signed by Steve Jobs, a rare Apple neon sign, and promo materials from the 1990s including a “Think Different” watch and iMac banner. Taken as a whole, this important auction tells the story of Apple from its earliest foundation to the modern day.

Every month we offer collectors more than 1,000 quality, fully guaranteed signed items, including photos, documents, letters, and books from a variety of categories—just as we have for more than 30 years.

Each autographed item is accompanied by a full 100% lifetime guarantee of authenticity. We proudly employ not only well-respected, in-house experts to examine every item sent to us, but coordinate with third-party authenticators in various fields including Civil War-era notables, classical and contemporary music, historical figures, sports figures and space explorers to confirm our opinions.

Every month, all items are beautifully presented in a full-color catalog, with many full-page displays and numerous benefiting from detailed research descriptions. When you are an RRAuction registered bidder, you will also have access to our company’s auction archives.

You may rest assured that every consignment—and every consignor—is treated with ultimate respect. As soon as you ship us your item, that piece is covered by our own insurance, so there’s no need for you to worry about any extra cost. We offer competitive rates and fast consignor pay-offs.

When you’re an RRAuction client, you can always buy and sell with the confidence…a confidence that 30 years of experience and customer satisfaction brings with it. Entrust your autographs to professionals who have built a reputation to deliver consistently remarkable results!

Register to Bid Now or Consign to RR Auction

About RR Auction
Headquartered in Boston’s North End, RR Auction is a globally recognized and trusted source for rare documents, manuscripts, autographs, and historic artifacts. Since its inception in 1980, RR has achieved countless record-setting prices in over 425 successful sales, including Truman Capote’s hand-notated manuscript for Breakfast at Tiffany’s for over $300,000, President Kennedy’s 1963 convertible for $318,000, and a pair of Bonnie andClyde’s guns for over $500,000. Internationally known and frequently featured in all media outlets—with appearances on NBC’s Today Show, CBS This Morning, Fox News, the New York Times Sunday Magazine, and the London Times—RR Auction prides itself on selling authentic material, thoroughly examined by in-house experts and third-party authenticators, to uphold the guarantee of authenticity. With a stunning full-color print catalog and a massive online presence, RR Auction’s nearly four decades of business continue to grow, achieving record prices for clients around the world.