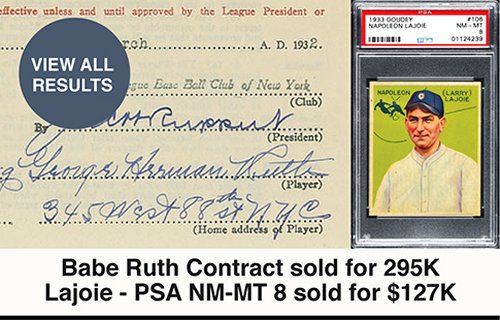 Ruth eventually settled for $75,000 a year, plus 25 percent of the net receipts from Yankee exhibition games. “It was the first time in Ruth’s long career—since the day in 1914 when he signed for $600 per season—that he had ever taken a cut in pay,” added Livingston. Among other player contracts; Lou Gehrig’s 1935 New York Yankees Contract for Gehrig’s first season as Yankee captain sold for $183,500, and Christy Mathewson 1902 New York Giants Contract sold for $68,481.

Additional highlights from the sale include:

Founded in 1976, RR is always inviting quality consignments for 24+ annual sales spanning a wide variety of categories, especially their next Sports Auction set for this Fall.