Historic items from legends like Sandy Koufax, Muhammad Ali, Joe DiMaggio, Babe Ruth, Michael Jordan and Mike Trout, the Goldin Auctions 2018 Spring Premium Live & Catalog/Online Auction is sure to get the attention of collectors when 629 lots of sports, entertainment and historical artifacts hit the auction block on April 9. The 53 premium lots will be sold at a live auction on April 28 at the NYY Steakhouse in New York City with an additional 570+ lots up for bids at GoldinAuctions.com, through May 5. 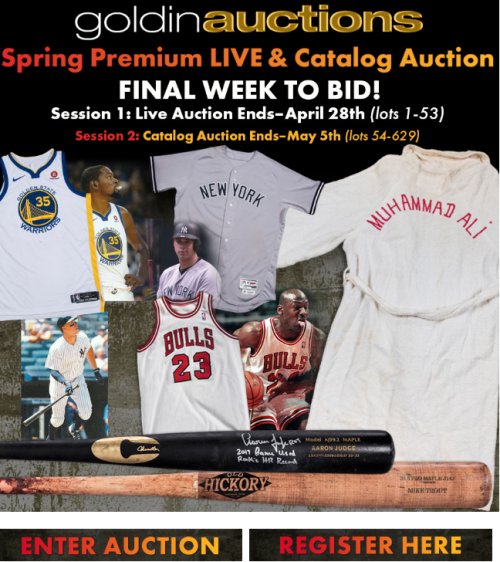 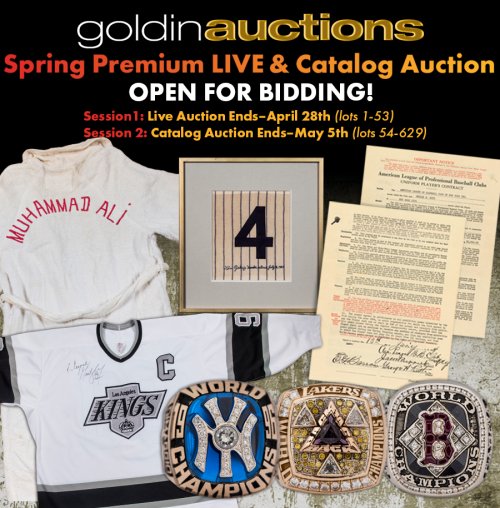 Lot #26: 1934 Babe Ruth Signed New York Yankees Players Contract – Ruth’s Final Contract With The Yankees! (PSA/DNA)
This is the Babe’s last Yankees contract! Though clearly on the downside of his majestic career, the Babe was still a big draw, and some clubs relied on the Yankees and Babe Ruth coming to town to make a profit. The Yankees still felt the same way, since the Babe had been the man who turned the team from a being a second-rate franchise into the most respected sports franchise in the country. For 1934, owner Jacob Ruppert decreased Ruth’s salary from $52,000 to $35,000. After the season, to Ruth’s disappointment, the Yankees also failed to offer him the manager’s spot, instead proffering him the helm of their top farm club in Newark. Ruth’s time in pinstripes had come to an end. The American League Uniform Player’s Contract has been stamped “JAN 16 1934” on its cover and dated “Jan’y 15th” on the interior signature page. The contract has been filled out in typewriter, noting Ruth’s 1934 salary as “$35,000.00.” The contract is signed on the interior page “George H. Ruth” in strong black fountain pen. Co-signing are the architects of the Yankees legacy, owner Jacob Ruppert and general manager Ed Barrow. Both men have signed in the same strong black ink as Ruth. An important piece of baseball’s past, marking the Babe’s last season on the team that he made famous. This document comes with a LOA from PSA/DNA (AE08131).

Lot #41: 1965 Muhammad Ali Fight Worn Robe Versus Sonny Liston (Phantom Punch Fight) On May 25, 1965 – First Ever Fight as Muhammad Ali (Hamilton LOA, Letter of Provenance)
Days after beating Sonny Liston to become the WBC Heavyweight Champion on February 25, 1964, Cassius Clay stunned the world by announcing he had joined the Black Muslims. A month later the Champ defiantly declared, “Cassius Clay is a slave name. I didn’t choose it and I don’t want it.’” He chose to be known as “Muhammad Ali.” A little more than a year later, the two boxers met at Central Maine Youth Center in Lewiston, Maine for their much-anticipated second bout. At the weighing in ceremony just hours before the fight, Ali entered the ring shrouded in a white terry cloth robe with “MUHAMMAD ALI” proudly emblazoned across the back in red letters. This was the first time the fighter appeared in the ring wearing the name that would soon be known around the world: “Muhammad Ali.” Looking at footage of the weighing ceremony, it becomes readily clear that this is the very robe Ali was wearing. The unusual dot over the “I” in “Ali” allows as solid a photo match of this historically important robe as possible. This is the very robe in which Ali first publicly displayed his chosen name to the world. The robe is complete with a solid provenance originating from Ali’s training camp at Chicopee, Massachusetts. The white terry cloth robe has an Everlast label sewn inside the collar. The label has faded from age and laundering but remains intact. The robe has two external pockets and is closed with a belt of matching terry cloth that is present. The sleeves are closed with zippers, both of which are present though the one has lost its pull-tab. The back boasts “MUHAMMAD ALI” in 2 3/8” tall letters direct embroidered to the robe in bright red thread. The robe comes with a notarized letter of provenance from John Pradella, who received this robe from Solomon McTier, Ali’s sparring partner and a LOA from noted boxing expert Craig Hamilton.