Babe Ruth never got to fulfill his dream of managing in the major leagues, but he did get to act as skipper of the East squad in the 1945 Esquire All-American Game at the Polo Grounds. Now, the uniform worn by the Babe that day is up for auction, where it could fetch $200,000 or more. 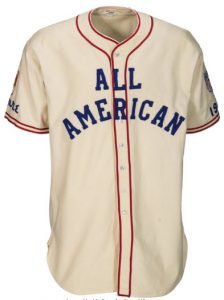 Heritage Auctions is offering the special jersey and pants in its February Platinum catalog.  Ruth’s jacket from the same game sold at auction in 2015.  Bidding had reached $70,000 by Thursday, with more than two weeks remaining.