Three vintage Babe Ruth cards sold for a combined $222,270 in Memory Lane’s Summer Rarities Auction which closed early Sunday morning but there were plenty of other noteworthy sales. 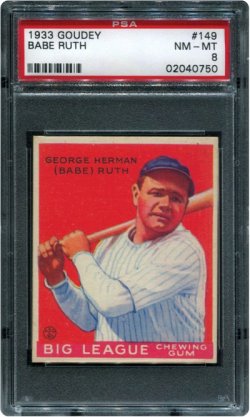 “The auction was a huge success,” said Memory Lane’s J.P. Cohen.  “The market for high quality vintage cards is as strong as it’s ever been and the results proved that.  Ruth is still the gold standard but interest in other cards from all sports was extremely high.”

Baseball wasn’t the only sport attracting big bids, however.  Football rookie cards were also popular. A 1957 Topps Paul Hornung rookie card graded PSA 9 rocketed to a stunning $50,323 when the dust settled.  No public sale of a Hornung rookie card had reached even $8,000 prior to the Memory Lane catalog.

Memory Lane also offered some vintage unopened material and it’s obvious interest remains extremely high.  A 1972 Topps Series One wax box was nailed down for $11,347 while a 1980-81 Topps basketball wax box from the set that gave us the iconic Larry Bird/Magic Johnson rookie card, soared to $4,870.

Memory Lane is now taking consignments for its upcoming I Own It Now sale and its next major catalog auction, slated for this fall.  For more information, visit their website or call 1-877-606-5263.