Set to open July 27, the auction will also feature the collection of the late big league player and manager Don Baylor.

Known for bringing some of the hobby’s true vintage baseball card icons to market, Memory Lane will open the auction with one of the hottest cards on the market, a T206 Ty Cobb green portrait graded PSA 8.  One of only eight at that level on PSA’s Population Report, the card carries a Sweet Caporal 150 Subjects/Factory 30 back.  Bidding will open at $50,000.  It’s one of several different Cobb cards in the auction with the highest graded T206 Uzit back also among the more than 875 lots. 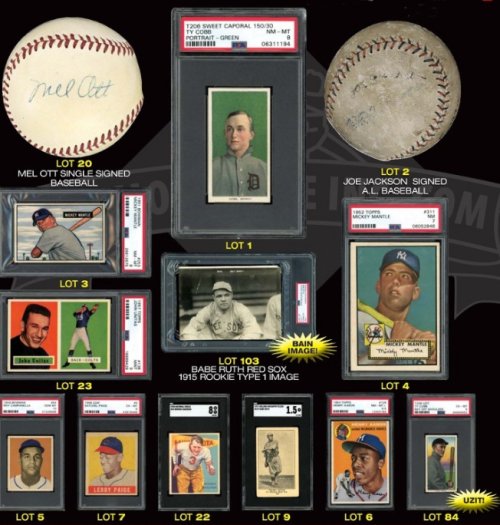 T206 factors heavily into the auction with numerous high-grade cards being sold in individual lots as well as a near set of 483 PSA-graded cards that ranked 14th on the 520-card set registry with a 3.88 GPA.

A 1909 E90-1 American Caramel Joe Jackson rookie card, a 1917 Collins-McCarthy Babe Ruth, several high-grade T3 Turkey Reds and a NM/MT example of the 1935 National Chicle Bronko Nagurski are among the other pre-war highlights.

Mickey Mantle’s two most desirable cards will lead off the post-War selection:  a 1951 Bowman rookie card graded PSA 8 and 1952 Topps rated PSA 7. They’ll be joined by one of only two PSA 10 1949 Bowman Roy Campanella rookie cards, a 1954 Topps Hank Aaron rookie card graded PSA 8.5, a 1948-49 Leaf Satchel Paige rookie (PSA 6), one of just eight 1957 Topps Johnny Unitas rookie cards ever to grade PSA 9 and a 1965 Topps Joe Namath PSA 8.  The last PSA 8 1958-59 Topps Bobby Hull rookie sold for a whopping $84,000 just over two years ago.  The Memory Lane auction will offer a new opportunity to own what’s considered one of the hobby’s most important vintage hockey cards.

As usual, the auction includes dozens of complete and near complete sets, hundreds of graded singles from all sports and a big selection of vintage unopened sports and non-sports packs and boxes.

The auction will feature dozens of pieces of historic sports memorabilia, including a Joe Jackson/Buck Weaver signed baseball dating to their final season before both were banished from the game, a high-grade Mel Ott single signed baseball, a Babe Ruth-Lou Gehrig signed 1927 barnstorming tour photo that’s inscribed and dated by Gehrig; a Mickey Mantle signed and inscribed high school yearbook from 1947; a 1951 Yankees team signed baseball from Mantle’s rookie season that also includes Joe DiMaggio and 24 others.  Memory Lane’s consignor acquired the ball from former big leaguer Johnny Hopp 30 years ago when he was parting with many of his career momentos.

As usual, Memory Lane’s catalog includes a strong group of vintage photos featuring past greats.  The headliners include a young Ruth snapped by legendary photographer George Grantham Bain in 1915, a 1930s Type 1 photo of a smiling Gehrig from the lens of George Burke and a group of four photos from the opening of Yankee Stadium in 1923.

The auction also includes a one-of-a-kind item that will require some logistics from the winning bidder. Up for grabs will be the original basketball court from the Spectrum, Philadelphia’s legendary sports and entertainment venue.  The 6,720 square-foot floor is currently stored in Ohio and carries a $50,000 minimum bid.

Bidding will close August 10.   More information will be available on Memory Lane’s website in the days ahead.  You can see many of the items from the auction at the company’s booth during this year’s National Sports Collectors Convention in Chicago July 31-August 4.