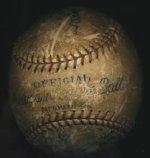 A ball traced to Babe Ruth’s record-breaking home run campaign of 1927 is set to be offered in an upcoming auction.Â Â Ruth would swat 60 home runs in 1927, breaking his own record and establishing a mark that would stand until Roger Maris broke it in the same ballpark during a 162-game 1961 season. The ball stayed in the original ownerâ€™s family, until it was sold in a Mastro Auctions sale in 2005. After enjoying it for awhile, the buyer has now consigned the ball to Memory Lane Incorporated which will offer it in its upcoming spring auction. Click here to continue reading article on sportscollectorsdaily.com.