High end and scarcity ruled the day as Memory Lane wrapped up its Fall Rarities Auction early Sunday morning. Featuring over 1,750 lots, the auction generated $10,475,389 in sales.  Vintage baseball cards led the way, with several items selling for six-figure amounts, topped by a 1953 Bowman Color Mickey Mantle graded PSA 9, which sold for a record price of $473,793. With only one 10 in existence and 9s rarely surfacing, bidding was fierce and the former record of $77,500 set just two years ago was obliterated. The auction featured several high-grade Mantle cards and none disappointed.

A 1955 Bowman Mantle graded PSA 9 was the third highest selling lot in the auction, with the realized price of $375,483, besting the previous record set just a few months ago by more than $160,000. The card was famously pulled from an unopened cello pack at the 2018 National Sports Collectors Convention in Chicago.

It wasn’t just Yankee icons seeing a lot of action, though. A pair of high-grade vintage Nolan Ryan cards attracted a lot of bidder interest. A 1968 rookie card soared to $125,583 while a 1973 Topps Ryan—one of six graded PSA 10– sold for an astounding $70,960. Dating back to 2015, others have generally sold in the $15,000-$20,000 range. Collectors wanting more proof that strong prices aren’t exclusive to rookie cards need only look at the ’73 Ryan—and the $27,457 sale of a PSA 9 1966 Topps Sandy Koufax—the last individual card in the career of the legendary Dodgers ace. 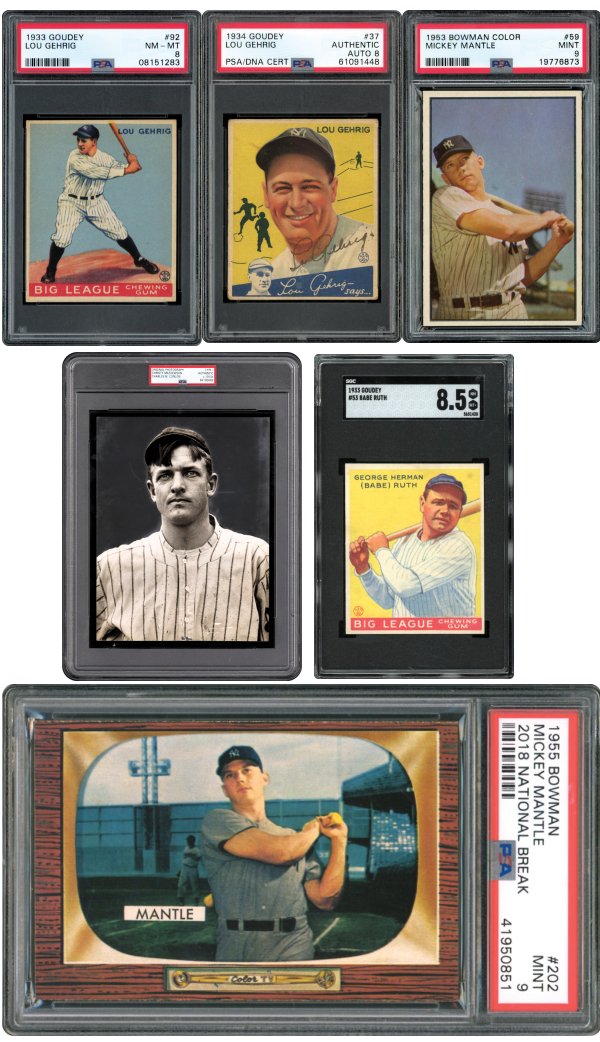 The only PSA 10 1952 Topps card of Tommy Brown, who during World War II became the youngest position player to appear in a major league game, generated a buzz with bidders before closing at record price of $64,814.

Pre-War baseball cards sold included a T205 Cy Young graded PSA 7. High-grade copies of the gold-bordered issue are always hard to come by and the Young card wound up going for $110,084, a record price for any T205 at the PSA 7 level. A 1915 Cracker Jack Branch Rickey graded PSA 5 had plenty of fans, too, selling for $16,886. A newly discovered and one-of-a-kind Lenox back T206 Hughie Jennings, which entered the hobby as part of a collection brought to a Georgia hobby shop earlier this year, closed at $9,662.

A second catalog shipped to bidders featured dozens of rare photographs. Top prices included $46,111 for a 1947 Jackie Robinson image and $36,090 for a 1917 Joe Jackson photo dating to that year’s World Series.

Memory Lane is accepting consignments for its next auction, scheduled to open late this year.