Every October, baseball champions are crowned-and sports legends are created. And October also is when Goldin Auctions, the industry’s premier sports auction house, offers its one-of-a-kind “October Legends Auction,” featuring some of the most significant and unique game-used memorabilia from many of the greatest players in sports.

From today through Nov. 1, collectors can bid on more than 1,100 items in the Goldin Auctions October Legends Auction, including sports equipment used by the biggest stars, championship rings and awards, historical sports documents and hundreds of lots of rare cards. For more information or a free catalog, visit www.GoldinAuctions.com.

“Among the featured items in this year’s October Legends Auction is a collection from Philadelphia Phillies star Mike Schmidt, possibly the greatest third baseman of all time,” says Ken Goldin, founder of Goldin Auctions. “Nothing directly from Schmidt has ever hit the market before, so these are truly unique items because his memorabilia has been nearly impossible to obtain. These are all original awards, game-used items and personal items, complete with notarized Letters of Authenticity for everything in the collection.” Schmidt, who played 18 seasons for the Phillies, was a 12-time All Star and three-time National League MVP who led the league in home runs eight times and in RBIs four times and won the Gold Glove Award 10 times. He entered the Baseball Hall of Fame in 1995. 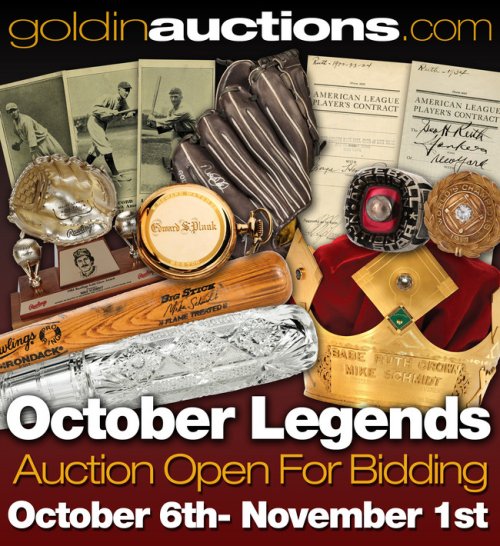 Among the items in the Schmidt collection is his actual 1976 Babe Ruth “Sultan of Swat Award” crown (Lot #20), expected to be to be one of the most sought-after items in the auction. The crown, one of baseball’s most coveted awards, was presented to and personally owned by Schmidt for leading MLB in home runs that season. Also offered is Schmidt’s 1984 Gold Glove Award (Lot #21), presented to and personally owned by the baseball king of Philadelphia.” In 1984, Schmidt cracked his 400th home run in a game against the Dodgers, and the actual 400th Home Run Game-Used Bat (Lot #25) is also offered in this special collection. Also highlighted is Schmidt’s 1986 Mel Ott Memorial Award (Lot #24), the last of his eight Mel Ott awards presented to and personally owned by Schmidt for leading the N.L. with 37 homers.

Other Schmidt memorabilia includes the Game-Used Bat for Home Runs #518-520 (Lot #26); two rings presented to and personally owned by Schmidt: his 1970 Collegiate All American Ring (Lot #18) from his days playing shortstop for Ohio University, and his1976 All Star Ring (Lot #19), from his second of a dozen All Star games; and four historic balls, each with a notarized letter of authenticity from Schmidt: Home Run Ball #537 (Lot #27), the home run that passed Mickey Mantle; 47th Home Run Ball of 1980 (Lot #28), which tied Eddie Mathews for most hits by a third baseman in a season; his Phillies All-Time RBI Record-Breaking Ball (Lot #29), which drove in his 1,289th run in 1986; and Home Run Ball #513 (Lot #30), passing Eddie Mathews in 1987 to become the all-time home-run leader for a third baseman.

Memorabilia from Schmidt’s early days include his High School Letterman Sweater (Lot #32), from his time at Fairview H.S. in Dayton, Ohio, where he graduated in 1967, and his1971 Ohio University Letterman’s Jacket (Lot #33), worn by Schmidt during his time as a member of the Bobcats baseball team.

Other highlights of the October Legends Auction include more than 80 Derek Jeter items plus several museum quality Babe Ruth artifacts including: the first and last player contracts Babe Ruth signed as a member of the Yankees. The 1922 Babe Ruth New York Yankees Contract (Lot #5) was for an unprecedented $52,000 per season. The 1934 Babe Ruth New York Yankees Contract (Lot #9) was the Bambino’s final contract with the Bronx Bombers. The rare document is signed by four members of the Hall of Fame-“George H. Ruth,” “Jacob Ruppert,” “Ed Barrow,” and “William Harridge.” In addition, Ruth’s 1929-1930 White Hickory Game-Used Professional Model Bat (Lot #6) also is on the block, a “George H. Ruth” signature model with bold stampings and perfect finish handled by the Babe himself (PSA/DNA Graded GU 10).

Here’s a look at some of the other highlights in the October Legends Auction:

* 1903 World Series Program Game One Score Card (Lot #1), an extremely rare “Souvenir Card” program for the first-ever World Series, which pitted the Pittsburgh Pirates against the Boston Americans of the upstart American League, and Honus Wagner vs. Cy Young. The scorecard is perfectly scored and non-restored.

* 1916 M101-4 Sporting News cards (Lot #4), a fully untouched, complete set (200 in all), fully encapsulated and graded by PSA, except for card #11 Jack Barry, which was graded “authentic” due to a unique printing error on the back. The set has all of the top stars of the day, including Honus Wagner, Ty Cobb, Casey Stengel, Walter Johnson; a Babe Ruth rookie card; and “Black Sox” players including Buck Weaver, Eddie Cicotte and a rare Joe Jackson card

*1986 Detroit Tigers Jersey signed by Ronald & Nancy Reagan (Lot #17) – An actual 1986 Tigers jersey worn by southpaw Bill Scherer was presented to and signed by the President and First Lady to CATCH – a children’s charity. Comes with full LOA from PSA/DNA.

* “Honest” Eddie Murphy 1913 World Series Full Size Glass Presentation Bat (Lot #37), which was presented on the field at Game 2 of the 1913 Series, complete with LOA from Murphy, who played for the Philadelphia Athletics at the time.

* Babe Ruth Personally Owned & worn Diamond Pinky Ring (Lot #40) – A size 9/7.4 gram 18K white gold personally owned Babe Ruth ring, complete with a single diamond on the face. Inside is stamped “18K” with other etchings which have lightly worn away. This ring shows great use with general overall wear including several scratches and light nicks. Personally owned Babe Ruth items are extremely rare, and highly desirable. Comes with a video and images of Babe wearing the ring.

* 1928-1930 Babe Ruth Professional Model Game-Used Bat Given to Ty Cobb (Lot #167). This white hickory bat was produced specifically for Ruth (“George Babe Ruth” is scripted across the barrel) and shows heavy game use.

* 1960 Leroy Neiman “The Middle Weight” Original Painting (Lot #10)-the oil on canvas is the first sports painting by the iconic artist, showing his interest in the sport of boxing.

* Eddie Plank 1913 Philadelphia Athletics World Series Championship Pocket Watch (Lot #36), a spectacular item presented to the left-handed pitcher and his teammates after their five-game conquest of the New York Giants.

* 2013 Chris Davis Game-Used and Signed Auburn Tigers Iron Bowl Helmet (Lot #14), worn by Davis (now with the S.D. Chargers) during his 100-yard-plus return of a missed field goal with no time left on the clock to beat Alabama in the top college football play of 2013.

* Masahiro Tanaka Game Worn (4/16/14) Jersey (Lot #159) – The jersey worn by the Japanese star for his first win at Yankee Stadium. Authenticated by MLB Authenticated and Steiner Sport. The jersey shows nice evidence of game use with dirt staining and general overall wear.

The bidding runs to Nov. 1 at www.GoldinAuctions.com.