SCP Auctions’ 2017 Spring Premier online auction runs through Saturday, June 10, at www.scpauctions.com. Leading the way is “The Original Wagner” T206 card from the massive J. Ross Greene Collection as well as 20 cherished items from the widow of Willie Stargell including the late Hall of Famer’s 1979 National League MVP Award and ’79 World Series ring as a member of the Pittsburgh Pirates. Bid, view and register for the auction at www.scpauctions.com .


The sale of the 1876 Founding Documents and Original Constitution of Major League Baseball has been delayed due to clarification of title. SCP Auctions apologizes for any inconvenience this may have caused and looks forward to resuming the auction of this item as soon as possible. Other top lots include Babe Ruth’s signed Last Will & Testament from Dec. 26, 1933; Michael Jordan’s 1984 Olympic gold-medal-winning game worn and signed Converse Shoes; and a 1968 Nolan Ryan Topps rookie card that’s been graded PSA Mint 9. 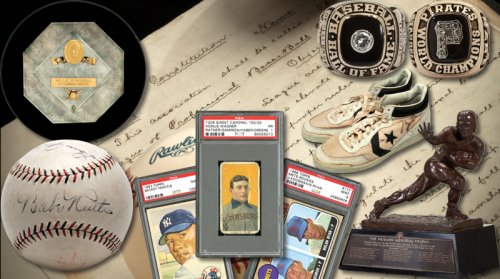 SCP Auctions is pleased to announce that it has secured the vast J. Ross Greene Collection of more than 100,000 pre-war and post-war baseball and football cards gathered over more than half a century. In addition to complete runs of Topps and Bowman baseball and football sets, the collection includes hundreds of Hall of Fame stars and key rookie cards to be offered as singles and group lots. Since 1996, Greene has been the proud keeper of “The Original Wagner” T206 card, a singularly important example of the world’s most famous baseball card that got its name because it was the first 1909-11 Honus Wagner card that was referenced and pictured in mainstream media (1930). “The Original Wagner” Estimate: $500,000+.

Among the items being auctioned as part of the late Hall of Famer’s personal memorabilia collection are Stargell’s 1979 Pittsburgh Pirates World Series Champions ring and ‘79 National League MVP Award; his 1988 Hall of Fame Induction ring; two personal player World Series trophies from 1971 and ’79; and his 1962-82 Rawlings Career Gold Glove Award. Affectionately called “Pops” by teammates and fans alike, he launched a total of 475 home runs and drove in 1,540 runs during his prolific 21-year MLB career, all with the Pittsburgh Pirates, a testament to his impressive power and fierce loyalty. Estimate: $500,000+

When the great Babe Ruth passed away on August 16, 1948 at the age of 53, a national treasure was lost. It is well-documented that the vast majority of Babe’s personal memorabilia was gifted, at Ruth’s consent, to the National Baseball Hall of Fame shortly after his passing. The offered Last Will and Testament is among only a few Ruth mementos ever offered to the public with direct Ruth family provenance. It is accompanied by a LOA from Babe Ruth’s grandson Tom Stevens. Estimate: $125,000

SPC Auctions is proud to feature one of the most coveted artifacts from Michael Jordan’s legendary playing career: the actual shoes he wore in the 1984 Olympic Finals against Spain on August 10, 1984, at The Forum in Inglewood, Calif. These historic sneakers are the last pair Jordan wore in competition as an amateur and represent perhaps his crowning athletic achievement before turning professional. A 21-year-old, baby-faced Jordan led USA in scoring at 17.1 points per game during the ’84 Games. In USA’s 96-65 victory over Spain to claim gold, Jordan scored a game-high 20 points while sporting these classic Converse sneakers. It was the last time MJ was ever seen wearing a non-Nike pair. Estimate: $75,000+

From National Collegiate Championships to Super Bowl titles, the sport of football has produced its share of memorable moments out on the gridiron. Many of these achievements have been commemorated via Super Bowl rings, National Championship trophies and game-worn equipment. Each of those categories is captured in SCP Auctions’ current 2017 Spring Premier online auction.

From Josh Gibson and Satchel Paige to Roy Campanella and Jackie Robinson, the Negro League produced countless baseball stars, many of whom are now rightfully recognized in Cooperstown for their outstanding contributions to the game. In its 2017 Spring Premier Auction, SCP Auctions has more than a dozen different lots of historic memorabilia devoted to some of the most recognized players and teams from the Negro League.