SCP Auctions’ 2022 Spring Premier Auctions is off to the races, with the only Kobe Bryant game worn jersey ever to be photomatched to his rookie season playoffs, the only known Kobe autographed 1997 Skybox Metal Universe PMG, a PSA NM-MT 8 1951 Bowman Mantle rookie, a signed 1933 Goudey Babe Ruth #181 card, and much, much more. Bidding on the 916 lots began Wednesday, May 18th and will conclude Saturday, June 4, 2022 at www.SCPauctions.com.


The Kobe jersey photomatched by Meigray, Resolution, and Sports Investors to a pair of playoff games during the Mamba’s rookie season is the headliner of SCP’s sale this time around. May 8 and 10, 1997 were Games 3 and 4 of the Lakers’ Western Conference Semifinals matchup with the Utah Jazz, and part of the first NBA playoffs Kobe ever participated in. All three authenticators consclusively photomatched the purple and gold threads to these two games. Resolution and Sports Investors also matched the jersey to two regular-season games April 13 and 17 of that year. Most experts agree that the jersey was worn during the end of Bryant’s rookie season, as well as in all home playoff games that year.

Many more iconic Kobe items are being offered in the auction, including the sole known signed example of Kobe’s highly sought-after PMG. The PSA Authentic Altered card with a stunning Mint 9 autograph is numbered 60/100 and is the first and only known example ever offered publicly. It could very well be the only one that exists, period. This is a scarcer card than even his unsigned green PMG graded BGS NM-MT+ that sold for $2 million in February.

A variety of high-end vintage cards are featured in the sale as well. A 1951 Bowman Mickey Mantle rookie graded PSA NM-MT 8, an SGC EX-NM 6 1952 Topps Mantle rookie, a 1934 Goudey #37 Lou Gehrig PSA NM-MT 8, an autographed 1933 Goudey #181 Babe Ruth card, and a 1970 Topps Pete Rose PSA 10 are just a few of the vintage cardboard treasures sprinkled throughout.

On the memorabilia side of the sale, the first Scotty Cameron Newport victory putter ever created for Tiger Woods following his 1996 U.S. Amateur Championship win is offered. The putter comes to auction at the right time, as the market for rare Woods memorabilia is heating up. Barry Bonds’ historic 715th home run ball is also available in the sale. The historic blast moved Bonds ahead of Babe Ruth on the all-time home run list.

For soccer memorabilia enthusiasts, SCP is presenting an early career Diego Maradona match worn, signed and inscribed Boca Juniors jersey given a MEARS A10 for game use. The shirt from the legendary footballer also comes with a full LOA from Beckett for the autograph.

For game used bat collectors, SCP’s Spring Premier has something for you, too. A 1920-22 Babe Ruth game-used H&B bat from the beginning of his Yankee tenure comes to the auction. The massive 44-ounce stick was given a PSA/DNA 8.5 for game use, as well as a MEARS 9.5. Another huge bat being offered is a Mark McGwire game-used club from his record 70 home run season in 1998. The PSA/DNA GU 10 bat was also Resolution photomatched to two games from that year.

Other significant and important game-used items offered include a pair of dual-signed Adidas sneakers worn by Kobe during his rookie season, a 2021-22 LeBron James Los Angeles Lakers gamer photomatched to two games combining for 72 points, Kobe’s 2004 autographed NBA All Star kicks, and a pair of Giannis Antetokounmpo’s shoes photomatched to a massive victory during the Bucks’ 2020-21 championship season.

SCP is honored to present one of the top vintage baseball advertising sign collections in the hobby, the Capital Vintage Baseball Advertising Collection. In the early years of the 20th century all the way through the 1950s, baseball’s most famous players graced everything from trolley cars to window displays as they served as spokesmen for products. Extremely rare pieces such as a one-of-a-kind C. 1910 Christy Mathewson Tuxedo Tobacco box proof and a C. 1910 Walter Johnson Tuxedo Tobacco trolley car sign are being presented.

A handful of monster tickets from incredible games in sports lore have also been consigned to SCP for the auction. None are bigger than a stub from Jackie Robinson’s MLB debut to break baseball’s color barrier on April 15, 1947. Also being presented are a 1979 NCAA basketball semifinal stub signed by Magic and Bird, a full unused and autographed ticket from Kobe’s final farewell game in 2016, and a variety of others.

Several rare and historic PSA/DNA Type 1 original photographs have been consigned to SCP. These lots include two different original shots taken in 1920 by legendary photographer Paul Thompson of Babe Ruth during his first season with the Yankees, a 1947 Jackie Robinson photo taken the day of his rookie debut, and more. In all, over 100 original photo lots grace this auction’s catalog. 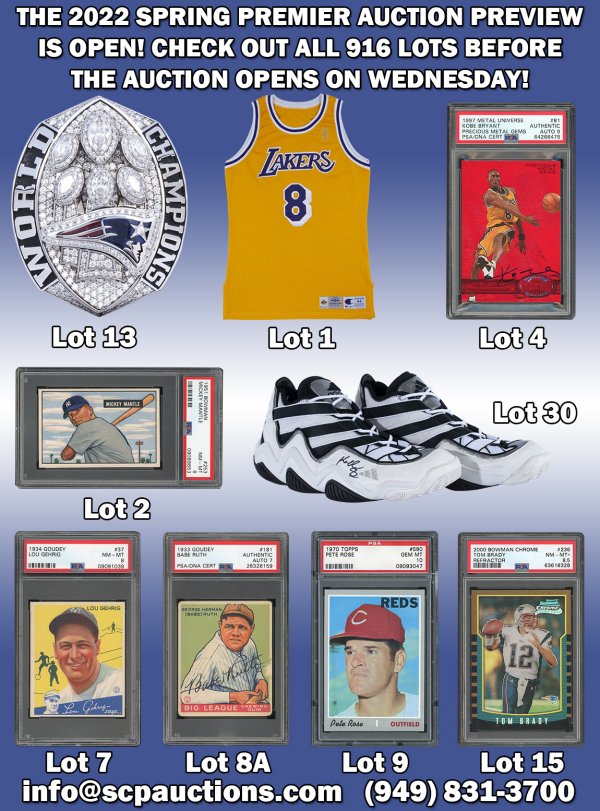 For more information, to register and view items, visit www.scpauctions.com.