SCP Auctions’ 2022 Fall Premier is headlined by a 1952 Topps #311 Mickey Mantle Graded NM-MT 8 by CSG (Certified Sports Guaranty).  This stunning high-grade 1952 Topps Mickey Mantle card among the featured items in the auction is just one of over 500+ lots being offered. The sale will conclude Saturday, December 10, 2022 at www.SCPauctions.com.

SCP Auctions is thrilled to present one of just a handful of 1952 Topps Mickey Mantles in existence to receive the lofty mark of NM-MT 8. Out of the 2,650 #311 Mickey Mantle cards slabbed by the four major card graders (CSG, PSA, SGC, and Beckett), few have received a better grade than this beauty. This example boasts a strikingly clear image of the Yankees legend against the sky-blue background. The back print colors remain bold and sharp. Front centering, an issue found even with other examples also graded NM-MT 8, is nearly perfect on this card.

On the game used memorabilia side of the sale, a 1918-22 Babe Ruth game used bat is offered. The historic club was given a PSA/DNA GU 7.5 and MEARS A8.5. The jersey worn by 2022 American League MVP Aaron Judge on opening day of his 2017 American League Rookie of the Year season is also being presented. For fans of two-way sensation Shohei Ohtani, SCP is presenting his game worn jersey from Jackie Robinson Day 2022. Shohei smacked his first two bombs of the campaign wearing the threads that he signed as well. A multitude of game worn basketball jerseys are also being offered, including a 1979-80 Dave Cowens Celtics jersey given a MEARS A10 assessment.

Several rare and historic PSA/DNA Type 1 original photographs have been consigned to SCP. These lots include a 1927 shot of the famed “Murderer’s Row,” (Ruth, Gehrig, Lazzeri), a scarce photo of Martin Luther King Jr. standing on the infamous Memphis balcony days before he was assassinated, and an iconic 1956 image of Marilyn Monroe meeting Queen Elizabeth. Also offered is a beautiful large panoramic photograph of the Bustin’ Babes and Larrupin’ Lous during their 1927 barnstorming tour. In all, over 50 original photo lots grace this auction’s catalog. 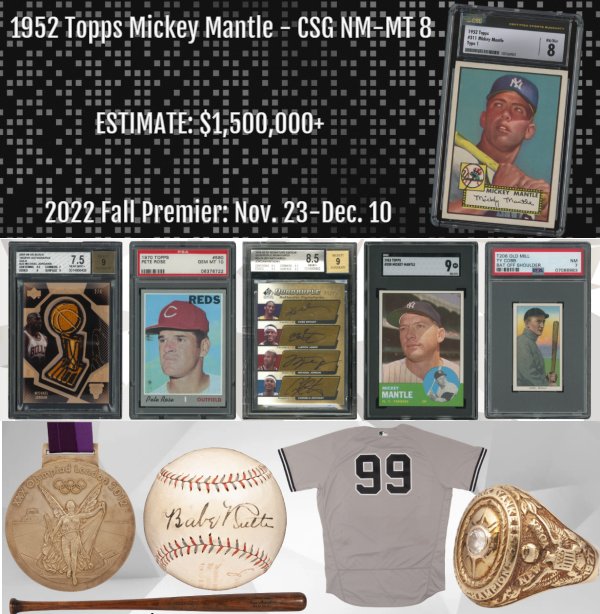