SCP Auctions is proud to present the The John Havlicek Collection. These items represent some of the most significant awards and mementos accumulated throughout his storied Hall of Fame career. Each lot comes with a signed LOA from John Havlicek.  Session One Bidding Ends: Friday, April 26th, 2013.  The remainder of the auction, including several collections consigned directly from former athletes will close in Session Two Bidding on Saturday, April 27th, 2013 .

Known for clutch performances in big games, John Havlicek posted impressive numbers during his illustrious 16-year pro career. In 1,270 regular-season games he scored 26,395 points and averaged 20.8 points to rank as the Celtics’ all-time leading scorer and the sixth-highest scorer in NBA history. He also grabbed 8,007 rebounds, recorded 6,114 assists, and played on eight Boston championship teams. He appeared in 13 consecutive NBA All-Star Games, earned 11 selections to the All-NBA First or Second Team, and was named to the NBA All-Defensive First or Second Team eight times. 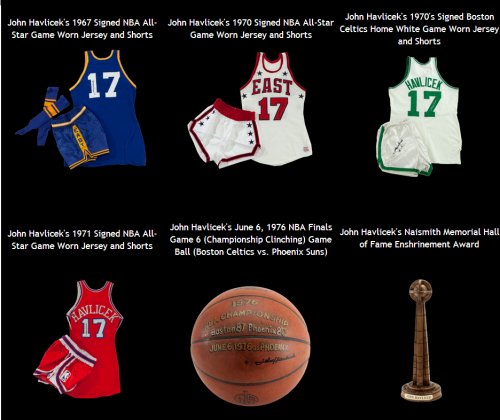 “We have had the honor in past auctions to offer many personal collections from some of the greatest players in sports history,” said Dan Imler, company vice president, “but never before has there been a single auction that has included more incredible collections with direct player provenance.”

Items from the careers of John Havlicek, Steve Garvey, Rollie Fingers, Bret Saberhagen, Chris Mullin and George Sisler will be included along with the usual array of sports memorabilia and vintage sports cards.