SCP Auctions is honored to announce that Babe Ruth’s pocket watch from the 1948 celebration of the 25th anniversary of the opening of “The House That Ruth Built” will be offered to the public directly from the Ruth family as part of SCP Auctions’ Spring Premier Auction.

Culminating the June 13, 1948 event, the Yankees ceremoniously retired Ruth’s number three and presented him with the gold watch. The 14 karat gold Longines pocket watch features engravings on the back that read, “Babe Ruth – Silver Anniversary – Yankee Stadium 1923-1948 “The House That Ruth Built.” Since Ruth’s death on Aug. 16, 1948, the watch has been preserved as a cherished heirloom by Ruth’s family. It is well documented that the vast majority of Ruth’s personal memorabilia was gifted to the National Baseball Hall of Fame shortly after his death. The watch is the only significant Babe Ruth artifact ever offered to the public with direct Ruth family provenance. The watch is estimated to sell for upwards of $500,000.

“This is the most significant item among only a handful of Babe Ruth’s personal mementos that his family has retained,” said SCP Auctions’ Vice President Dan Imler. “It is difficult to overstate the magnitude of this item. It represents the 25th Anniversary of Yankee Stadium – baseball’s grandest cathedral, the 25th Anniversary of the Yankees first World Championship, the retirement of Ruth’s iconic number, and Ruth’s final Yankee Stadium appearance and emotional farewell to his beloved fans. In a way, the watch could be perceived as Babe Ruth’s ‘Lifetime Achievement Award’ from the Yankees.”

Two months prior to his death, Ruth returned to Yankee Stadium for the last time on June 13, 1948 as part of the 25th anniversary of the opening of “The House That Ruth Built.” One by one, his old friends and former teammates, including those from his first championship team in 1923, were introduced to the nostalgic cheers of the capacity crowd. Finally, announcer Mel Allen’s voice boomed from the loudspeakers, “Ladies and Gentlemen, George Herman Ruth Babe Ruth!” Amidst a raucous ovation, the weakened Ruth, frail and ailing with throat cancer, stepped for the last time onto the infield grass, bat in hand, into what W.C. Heinz unforgettably described as “the cauldron of sound he must have known better than any other man.” Draped in his old uniform, he struggled forward, helped by the support of the bat borrowed from then future Hall of Famer Bob Feller, to address the crowd of 49,647 as they showered their hero with one final roar of affection and an ebullient singing of “Auld Lang Syne.” Nat Fein, a photographer for the New York Herald Tribune, immortalized the moment with a Pulitzer Prize winning photograph that endures as perhaps the most famous image in sports history, titled “The Babe Bows Out.” 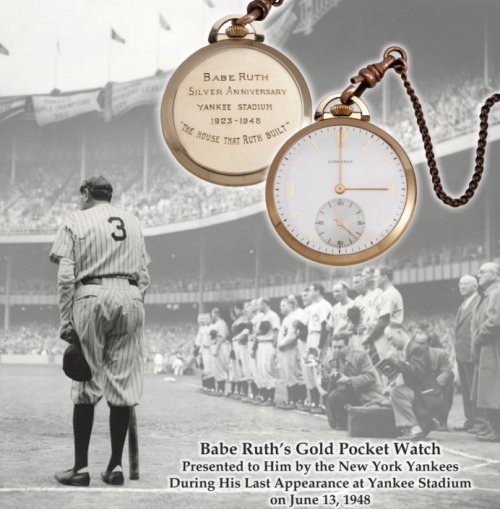 The Ruth watch will highlight SCP Auctions’ May Spring Premier Auction which will include hundreds of other significant items of sports memorabilia and cards. Bidding will be open to registered bidders on Wednesday, April 30 and conclude on Saturday, May 17. The auction will be conducted online at SCPAuctions.com. For more information on how to participate, visit www.scpauctions.com or call (949) 831-3700.