SCP Auctions sports auction event of the year ends this week. Highlights include the THE BRET SABERHAGEN COLLECTION. One of the greatest pitchers in the history of the Kansas City Royals, Bret Saberhagen boasted an amazing record of 74-30 in his top four seasons with the club.  Session One Bidding Ends: Friday, April 26th, 2013.  Session Two Bidding Ends: Saturday, April 27th, 2013

Saberhagen wrapped up a standout 16-year career with 167 wins vs. 117 losses and a sterling ERA of 3.34. Mix in a pair of Cy Young Awards, a World Series MVP nod, three All-Star appearances, a Gold Glove and an AL Comeback Player of the Year Award in 1998 and it becomes clear why the right-hander was regarded as one of the most feared pitchers in the American League through the last half of the 1980’s.

A pair of complete-game victories – including a Game Seven shutout – in the 1985 Fall Classic earned him that aforementioned World Series MVP, and at the same time cemented his place in the Royals’ pantheon of legendary figures and earned him the undying affection of legions of KC fans. He was also the last Royal to toss a no-hitter, a masterpiece that came in 1991.

SCP Auctions is proud to present the personal collection of Bret Saberhagen. A portion of the proceeds from the sale of this collection will benefit the The Bret Saberhagen Make a Difference Foundation. Get your initial bids in now to qualify for extended bidding on the closing days. 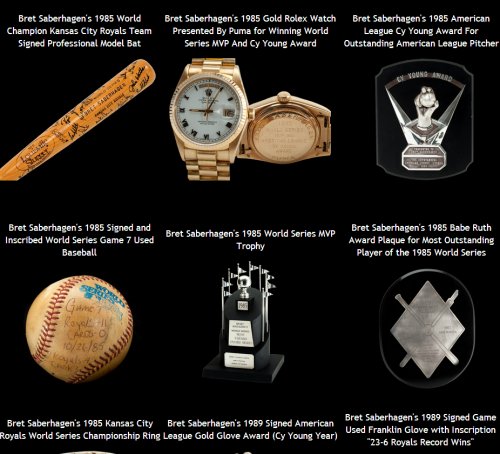