In SCP Auctions last auction, we introduced Part 1 of the Tim Gallagher Collection. The highlight was his Michael Jordan signed 1984-85 Star Co. #101 true rookie card that sold for $42,955. Starting in the late 1960’s, Gallagher compiled the largest basketball autograph collection extant, exceeding 20,000 signatures by his estimate. All of his Jordan autographs were obtained very early in the GOAT’s career (1981-89) either in person or through MJ’s former Bulls teammate John Paxson, who grew up with Gallagher in Ohio.

Part 2 (August 12-28, 2020) will feature even more gems, none more eye-popping than this MJ signed 1986 Fleer #57 rookie. The Jordan market has been on fire and his Fleer rookie has jumped dramatically. Unsigned Gem Mint 10 examples have reached $100K, while signed versions have hit huge numbers as well. As of July 21, the record is $125,000 from an eBay sale in late May. That card was dual-graded by Beckett: BGS NM-MT+ 8.5 (card) / BAS 10 (auto). Any well-informed collector knows that the card grade is way more important. So, we can safely call this BGS Mint 9 / BAS 9 example The Greatest Overall Michael Jordan Card Ever Offered. The half point gained on the card more than makes up for the point lost on the signature. The only question is, how much more? That six-figure answer will come Friday, August 28. Stay tuned… 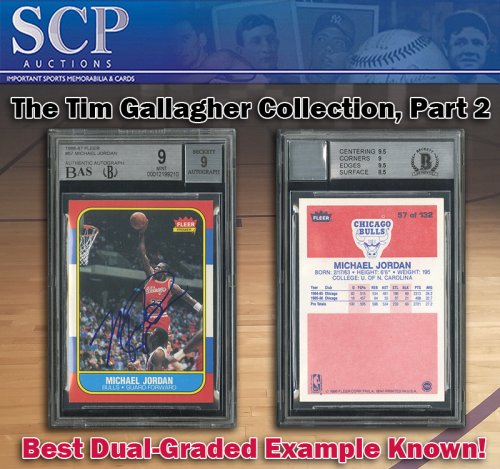