SCP Auctions is pleased to announce that it has secured four incredibly rare, never-before-offered at auction items directly from the family of Babe Ruth that will be up for bid in the company’s upcoming 2017 Winter Premier, which starts Wed., Jan. 4, and ends on Sat., January 21. Beyond their impeccable Ruth Family provenance, the pieces each tell a separate story about the man who became known as the “Sultan of Swat” and held Major League Baseball’s all-time career home run record (714) for nearly 40 years.

The first piece is a one-of-a-kind, custom-made “NEW YORK” flannel uniform manufactured by A.G. Spalding & Bros. that Ruth wore in 1938 at several stops to help promote the 1939-40 New York City World’s Fair. Sporting special “Trylon,” “Perisphere” and “1939” patches on both the right and left sleeves, the uniform touted the fast-approaching World’s Fair event and thanks to Ruth’s jovial antics – whether riding atop parade floats, showing up at business meetings in uniform or even conducting batting clinics wearing his New York World’s Fair uniform – the Fair attracted more than 44 million people to its exhibits over two seasons! 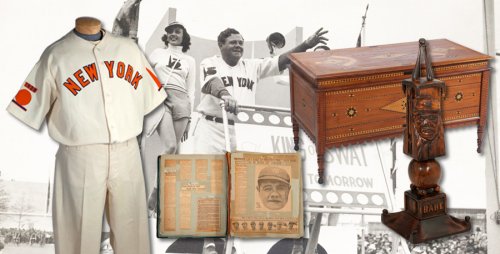 The second item, a beautiful, hand-crafted baseball-themed wooden chest, was awarded to Ruth in 1930 following the New York Yankees 1929 exhibition visit to Sing Sing Prison in Ossining, New York. On Oct. 29, 1929, Ruth – the consummate showman – and his reigning World Series champion Yankee teammates including Lou Gehrig, played an exhibition game against a prison team called the “Black Sheep.” When all the dust had settled, Ruth, who launched three home runs that day, and the Yankees emerged victorious, 15-3. The prisoners were so enamored with Ruth’s affable nature and heroic feats with a baseball bat that they constructed the aforementioned wooden chest which no doubt required months of painstakingly putting it together. The double-hinged cedar chest, which measures 37” long by 19” wide by 21.5” high, features a pair of inlaid baseball diamonds on its surface which are labeled “Nat. League” and “Am. League,” respectively.

The third item is a beautifully crafted, hand-carved wooden folk art statue of Ruth from 1933 that stands 22” tall on a base that measures 7.5” wide by 7.5” deep. It too has a baseball-theme to it and features a pair of Ruth hand-carved portraits, four small baseball bats and two baseballs.

The fourth item is a personal scrapbook that was created for Ruth by sports agent Christy Walsh in the early 1920’s. It includes numerous newspaper clippings covering the 1921 and ’22 Yankee seasons and its pages measure 15” high by 13” wide.