SCP Auctions is proud to announce The Angelo Dundee Estate Collection of boxing memorabilia for its November 2012 on-line auction. In a Hall of Fame career in professional boxing that began in 1952, Angelo Dundee gained acclaim as a brilliant corner-man, whether healing cuts, inspiring his fighters to battle on when they seemed to be reeling, or adjusting strategy between rounds to counter an opponent’s style. The renowned trainer was a guiding force to the two most celebrated fighters of his era, Muhammad Ali and Sugar Ray Leonard, and 15 other world champions.

The collection features hundreds of items spanning the breadth of Dundee’s extraordinary career and includes some of the most historically important Muhammad Ali memorabilia ever offered to the public.

Among the collection highlights are several significant pairs of Muhammad Ali fight-worn gloves including Ali’s (then Cassius Clay) gloves from his February 25, 1964 bout against Sonny Liston and his gloves from his March 8, 1971 bout against Joe Frazier (Ali-Frazier I). These two pairs of gloves represent Ali’s two most legendary fights and have been dubbed by SCP Auctions officials as “the most valuable and historically significant boxing artifacts in the world.” 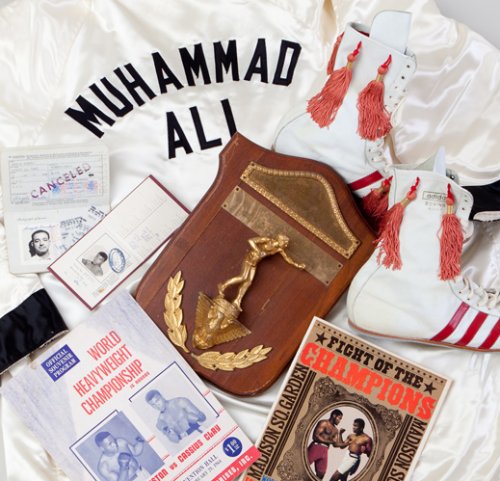 “These gloves represent boxing’s crown jewels,” said Dan Imler, SCP Auctions managing director, “and rank among the most significant sports memorabilia artifacts ever offered publicly. Muhammad Ali is a cultural icon beloved throughout the world. These are the ultimate tools of Ali’s trade from his most legendary bouts, used by him to forge his undisputed status as ‘The Greatest of All Time’.”

Clay’s 1964 bout with Liston was among the most anticipated, watched and controversial fights in sports history. The brash 22-year-old Clay entered the fight as a seven-to-one underdog against the seemingly unstoppable Liston. Clay’s improbable sixth-round TKO brought him his first heavyweight title. His jubilant and defiant celebration whereby Clay repeatedly taunts ringside detractors with his famous proclamations “I am the greatest!” and “I shook up the world!” has been rebroadcast countless times during the ensuing decades.

Seven years later, Muhammad Ali met Joe Frazier in the first of a trilogy of battles that may be the best series of contests between two combatants in the history of boxing. Ali, then 31-0, had been stripped of his heavyweight titles when, as Cassius Clay, he refused to be inducted into the military after being drafted for the Vietnam War. Frazier, at 26-0, had captured the title of undisputed heavyweight champion in 1970 with a technical knockout of Jimmy Ellis. Billed as “The Fight of The Century,” it was a brutal 15-round battle that ended with a decision in favor of Frazier. The epic struggle is considered by many as the greatest boxing match of all time. It was a practice of Dundee’s to mark Ali’s fight gloves with identifying notations on the interior either just prior to or after each fight to record their provenance. His period notations and signature appear inside each glove.

Jim Dundee, the late Angelo’s son, plans to donate a portion of the proceeds from the November, 2012 sale to the Muhammad Ali Foundation.

“Through the sale of this collection, I look forward to fulfilling my father’s wish that necessary medical care be provided and funded for my sister, who suffers from Multiple Sclerosis,” said Dundee.

Other significant artifacts from The Angelo Dundee Estate Collection of Boxing Memorabilia include the following:

For more information on how to participate in November’s auction, visit www.scpauctions.com or call (949) 831-3700.