SCP Auctions is proud to announce that it will be unveiling the Christian Laettner Collection as part of its Winter Premier online auction in January. More than two dozen lots chronicling Laettner’s prolific college basketball career at Duke and run with the 1992 U.S. Men’s Olympic Basketball “Dream Team” will go up for bid including a pair of NCAA Final Four rings Laettner earned during his freshman (1989) and sophomore (’90) seasons, respectively. Bidding will begin on Wed., Jan. 4, and run through Saturday, Jan. 21, 2017.

He was the 6′ 11″ star on the Blue Devils’ back-to-back national championship basketball teams of 1991 and ’92, the school’s first two national titles in history, and is forever etched in the minds of college basketball fans by virtue of his iconic, game-winning jump shot against the Kentucky Wildcats in the 1992 NCAA East Regional Final. A four-year starter, he also made critical contributions to Duke’s runner-up finish his sophomore year and Final Four appearance his freshman year. 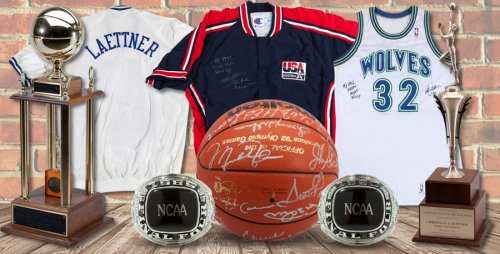 During his senior season of 1991-92, he averaged 21.5 points per game and secured every major National Player of the Year award. Duke retired his No. 32 jersey later that year and he was subsequently enshrined in the National Collegiate Basketball Hall of Fame. As the reigning National Player of the Year, Laettner was the only collegian selected to the 1992 U.S. Men’s Olympic Basketball team, which won the gold medal in dominant fashion by outscoring its opponents by an average of 44 points. Selected No. 3 overall in the 1992 NBA Draft by the Minnesota Timberwolves, Laettner went on to play 13 seasons in the NBA. From 1992 to 2005, he scored a total of 11,121 points, pulled down 5,806 rebounds and made 2,224 assists.