SCP Auctions is pleased to introduce “The Southern Fairway Find” of over one thousand 1909-1911 baseball tobacco cards including an unprecedented discovery of 42 rare Red Hindu back T206s and 2 newly discovered examples of the legendary T210 Old Mill Joe Jackson card. Nothing gets a vintage card collector’s heart beating faster than the promise of the next great “find”. 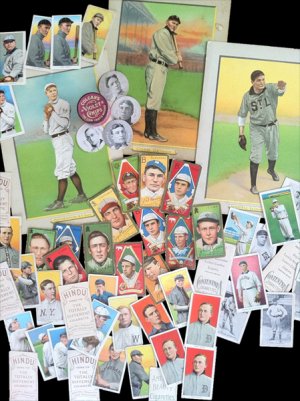 Hope springs eternal that there still exist dark attic corners, abandoned cigar boxes, and locked steamer trunks holding untapped caches of cardboard treasure. This latest bit of fantasy-turned reality hails from a Southeastern estate. Compiled by its original owner in the years the cards were issued, this collection has descended three generations before being cast into the hobby spotlight here for the first time.

“The Southern Fairway Find” includes over 1000 cards from a variety of issues produced within the 1909-11 time period. The majority of the collection is comprised of cards from the venerable T206 and T205 issues inclusive of hundreds of Hall of Famers. Yielded from within the T206 group are 42 Red Hindu back examples, 13 of which are Hall of Famers including 2 astonishing Ty Cobb Red Portraits. An additional 16 Brown Hindu backs are present. Red Hindu backs are among the most difficult to find of all T206 advertising backs. Prior to “The Southern Fairway Find” the total checklist of confirmed T206 Red Hindu back examples was estimated at just 46 different subjects. Acquiring common Red Hindu examples has proven daunting to collectors, while Hall of Famer offerings are nearly unheard of.

The collection includes an additional contingent of 158 cards from the 1910 T210 Old Mill issue, 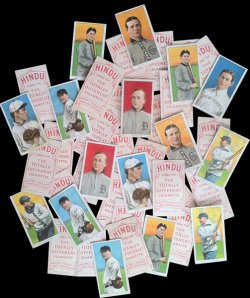 including many from the scarce 8th Series. Astonishingly, this fresh crop has produced not one, but TWO heretofore-unseen examples of the legendary T210 Old Mill Joe Jackson card. Produced nine years before the “Black Sox Scandal” that would eventually banish him from the game “Shoeless” Joe Jackson’s card from this series of Southern League baseball cards accounts for one of the most coveted rarities in the field of card collecting. Only a handful has survived the last century. 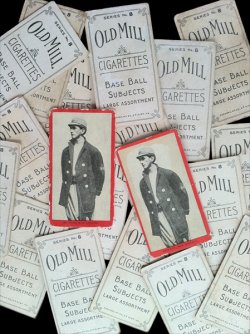