SCP Auctions is extremely proud to announce that it has acquired the personal memorabilia collection of Major League Baseball great Tony Gwynn. The late Hall of Famer’s coveted lineup of baseball heirlooms and mementos encompasses more than 100 lots and will hit the online auction block on Wednesday, April 8, at www.scpauctions.com.

It features many of Gwynn’s most prominent items including several MLB All-Star Game rings, a pair of Silver Slugger batting awards, a multitude of game-used baseballs chronicling milestone hits during his stellar 20-year career with the San Diego Padres, as well as dozens of personalized keepsakes that Gwynn received from fellow athletes and coaches covering all realms of sport.

“Tony had a wonderful baseball career,” said Alicia Gwynn, Tony’s widow, who will donate a portion of the auction’s proceeds to the Tony and Alicia Gwynn Foundation, a non-profit based in San Diego that focuses on improving opportunities for today’s youth. “But he was also a man of honor and integrity who really wanted to make a difference in this world. This auction will serve two objectives: to share his baseball memorabilia with the fans who loved him and to give something back to the city that treated us so well.” 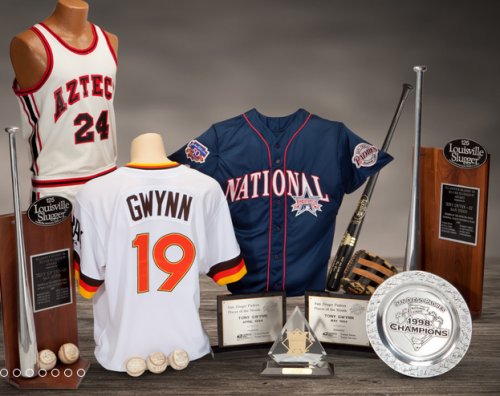 A standout player in baseball and basketball at San Diego State University, Gwynn was drafted on June 10, 1981, by both the San Diego Padres (third round) and the NBA’s San Diego Clippers (10th round). Electing to play baseball, Gwynn went on to have one of the best careers on record as he batted better than .300 for 19 consecutive seasons, surpassing Honus Wagner’s National League record set from 1897-1913. A 15-time MLB All-Star, Gwynn recorded 3,141 hits during his prolific playing days and collected eight N.L. batting titles along the way to tie Wagner’s other longstanding mark. He also played a major role in helping the Padres reach the World Series twice (1984 and ’98), the team’s only trips to the Fall Classic. Gwynn retired after the 2001 season and was elected to the Baseball Hall of Fame in 2007. The man often referred to as “Mr. Padre” died on June 16, 2014, following complications from salivary gland cancer. He was 54 years old.

“It’s a tremendous honor for us to conduct this auction,” said SCP Auctions President David Kohler. “Tony was obviously a great baseball player but he was also a well-respected man who earned the admiration of both his teammates and opponents and that says a lot about his character.”

Bidding is open to registered bidders only at www.scpauctions.com beginning Wednesday, April 8 and closing on Saturday, April 25. For more information on how to participate, please call 949-831-3700. The Tony and Alicia Gwynn (TAG) Foundation was organized in San Diego in 1995 by Alicia Gwynn. The TAG Foundation is a non-profit, 5013(c) charity dedicated to creating and supporting programs that enhance opportunities for youth to become healthy, educated, and productive citizens. For more information, visit www.tagwynn2.org.