SCP Auctions is proud to announce that its 2017 Spring Premier online auction will feature the J. Ross Greene Collection. Born of a childhood passion for sports and history, the collection represents a lifetime accumulation of cards and memorabilia honoring diamond and gridiron greats from the turn of the century to the modern era. The depth of Greene’s passion is reflected in the vastness of his collection, which boasts more than 100,000 pre-war and post-war baseball and football cards gathered over more than half a century. In addition to complete runs of Topps and Bowman baseball and football sets, the collection includes hundreds of Hall of Fame stars and key rookie cards to be offered as singles and group lots.

SCP Auctions VP Dan Imler states, “Few people in the history of the hobby have amassed collections of such scale; fewer still have managed it as quietly. Epitomizing Ross’s stealthy dedication is the centerpiece of his collection. Since 1996 Ross has been the proud keeper of The Original Wagner, a singularly important example of the world’s most famous baseball card.” According to Imler, the story of The Original Wagner and its distinguished pedigree has been known only to those immersed in the deepest circles of the hobby. Its status as the first T206 Honus Wagner card referenced and pictured in mainstream media (1930) is further enhanced by a documented chain of ownership by some the hobby’s most influential pioneers. For the last twenty years however, the whereabouts of The Original Wagner has been shrouded in mystery, its story unfinished. Next month, starting on Wed., May 24, SCP Auctions unveils The Original Wagner, adding the latest chapter to the collecting world’s most storied card.

“From the day I purchased the card until early 2014, I only knew that the owner before me, Bill Haber, worked for Topps and wrote the copy on the back of Topps cards each year,” says Greene. “For almost a decade I maintained contact with Sports Cards Plus, first with Clay Hill, a fellow Tennessean whom I told of my ownership of the Wagner, and since 2010 with Dan Imler. 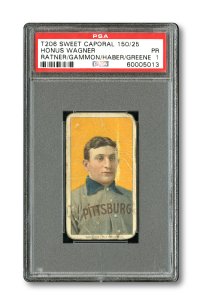 “In January of 2014 Dan made me aware of the incredible provenance of my Wagner. After learning the noteworthy lineage, I knew the Wagner, which I had initially viewed as simply a baseball card, albeit a much sought after one, now took on significantly greater importance to me. I realized that I was in possession of a true item of baseball and sports card collecting history. A unique, real and one-of-a-kind piece of Americana, with real character and documented provenance. I am proud to be a part of the team of three previous and esteemed owners, Willie Ratner, Wirt Gammon and Bill Haber. I consider myself blessed to have been the two decade steward and caretaker of this centerpiece of baseball memorabilia and the sports collecting hobby…the 1909 T-206, The Original Wagner.”

SCP Auctions expects that The Original Wagner could sell deep into six figures or even more. Bidding is open to registered bidders only at www.scpauctions.com beginning on Wed., May 24, and closing on Sat., June 10. For more information on how to participate and take part in the bidding, please call 949-831-3700 or visit www.scpauctions.com.